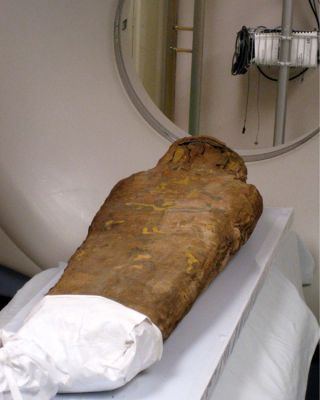 The child mummy going into CT scanner at Carle Foundation Hospital. Medical scans like this can provide valuable information about mummies without damaging the artifact.
(Image: © Sarah Wisseman)

A 2,000-year-old child mummy visited an Illinois hospital earlier this year so researchers could use imaging technology to look for clues to the child's life and death.

A computed tomography, or CT, scan, conducted in March, revealed a few tantalizing tidbits: a delicate facial structure; the wads of cloth that had been packed around the body; clearly visible internal organs, including the brain; and the severity of the fracture to the back of the child's head, which appears to have occurred after death. Unfortunately, the scan failed to elucidate a basic question about the mummy's identity: its sex.

"The dismaying part is the pelvis is collapsed, which means the physical anthropologists cannot do traditional measurements on the pelvis to determine its sex, so we still don't know if it's a boy or a girl," said Sarah Wisseman, an archaeologist with the Illinois State Archeological Survey, whose book "The Virtual Mummy" (University of Illinois Press, 2003) describes this research.

The cause of the child's death also remains elusive.

Medicine for the long dead

This was not the first time the mummy, acquired by the Spurlock Museum in 1989, received medical attention. The mummy is fragile and in order to preserve it, scientists must find nondestructive ways to study it. [Gallery: Scanning Mummies for Heart Disease]

For instance, shortly after acquiring it, investigators had the mummy X-rayed at a veterinary facility, where they discovered it belonged to a child. Based on the adult teeth coming in beneath baby teeth and the development of the bones, they estimated that the body was that of to a 7- to 9-year-old child.

The mummy also went for its first CT scan at the Carle Foundation Hospital in Urbana, Ill. A CT scan creates slicelike images of bone and soft tissue using X-rays; this technique allowed researchers to build three-dimensional reconstructions, including a digital reconstruction that allowed researchers to look through the mummy's interior, in a sort of virtual autopsy, all the way down to a wooden board under the body.

Twenty years later, advances in technology allowed researchers to create much higher-resolution images and better reconstructions, picking up on new details, even though the big questions remain unsolved.

Little information accompanied the mummy when the museum, part of the University of Illinois, acquired it from a private collector. The mummy arrived in the country in the 1920s, when it was still legal for someone to possess a mummy as a souvenir. However, no one knows from which archaeological site it came or how it traveled from Egypt to the United States, Wisseman said.

Tucked into the wrappings of the mummy, the researchers found what appears to some to be a male face portrait. These portraits acted as an additional identifier for the dead, but, based on past Egyptian mummy research, it is possible that this portrait was not of the individual wrapped inside, she said.

Another clue came in the form of images of Egyptian gods painted on the outside of the mummy's wrapping. Both of these findings point to a mummy created around A.D. 100, at a time when Egypt was part of the Roman Empire, Wisseman said.

Three-dimensional facial reconstructions, created by a forensic image specialists with the National Center for Missing and Exploited Children indicated that the child likely had West Asian or Mediterranean heritage, and more delicate features than previously thought .

The red pigment on the wrappings turned out to be lead oxide from Spanish mines. This fact places the Spurlock Museum's mummy with a group of other Roman-era mummies of similar decoration and the same pigment. Since this ingredient would have been expensive, the child most likely belonged to a wealthy family, she said.

A more detailed dental analysis puts the child's age at 8 1/2 years old when he or she died. But an attempt to extract ancient DNA from a foot bone was unsuccessful, Wisseman said.

While current technology can only offer limited clues to the mummy's story, that may change in the future.

"It could be a decade from now we have new technology for enhancing whatever we have," Wisseman said. "What we have to do is preserve what we have as well as possible."

Members of the research team are scheduled to discuss the new imaging results on Nov. 2, at the Spurlock Museum in Urbana, Ill.

Correction: This article was updated at 4:56 pm ET on Nov. 3 to include the correct dental age estimated for the child mummy, as well as clarify the nature of the facial portrait.