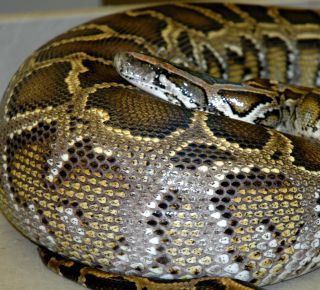 After pythons eat a meal, their organs — including their hearts — nearly double in size within a day. Now, researchers have learned how the snakes are able to achieve this sort of growth without heart damage, a finding that could lead to new therapies for human heart disease.

After a meal, python blood is so full of triglycerides, a form of cholesterol, that it appears milky, said study researcher Leslie Leinwand, a biologist at the University of Colorado, Boulder. In humans, these fatty compounds would be deposited in heart muscle, but the snakes escape without damage.

"The python heart is able to burn these fats as fuel very, very efficiently, without any harm to it," Leinwand told LiveScience.

Years ago, Leinwand read an article about Burmese pythons and their amazing ability to fast for months, gorge on food and undergo massive organ growth with no apparent ill effects. Plenty of researchers have looked to the strengths of other organisms to see if there could be any benefits to humans; for example, a diabetes drug released in 2005, called Byetta, was developed from the saliva of the Gila monster.

Leinwand wanted to know if python physiology might be the key to human drug treatments. In humans, heart growth can be a sign of health or of disease: Athletes' hearts grow large with exercise, but the chambers of the heart that pump the blood stay large, too. That makes the heart more efficient overall. In people with heart disease or high blood pressure, the heart muscle often swells as it works harder to pump blood. But this type of heart growth takes up space in the heart chamber, meaning each beat of the heart pumps less blood.

Figuring out how to encourage healthy heart growth in humans could be a boon for heart disease patients, Leinwand said.

"It's very well known from decades of work that exercise is good for your heart," she said. "But a lot of times, people who have heart disease can't exercise enough to get that benefit."

The goal, Leinwand said, is to create a drug treatment that could nudge a diseased heart toward healthy growth. [Top 10 Amazing Facts About Your Heart]

The heart of a python

First, however, she had to learn how to take care of pythons and set up a python colony in her Boulder lab. That took some time, she said.

Once the researchers figured out python husbandry, they set about figuring out the molecular secrets of python gorging and fasting. So they had pythons fast for 28 days (much less than they do in the wild, where they can go without food for almost a year), and then gorge on a mouse or rat weighing 25 percent of the snake's own body weight. Then the researchers analyzed blood from both the fasting python and the fed python to see what molecular changes occur. [Gruesome Images Reveal Python Digesting a Rat]

Early on in this experiment, a postdoctoral researcher in Leinwand's lab, Cecilia Riquelme, came to Leinwand with a suggestion: They should test blood plasma of pythons that had been fed — the part of blood that red blood cells float in — on rat heart cells to see if molecules in the plasma would make mammal hearts grow as they did the reptile hearts.

"That's a huge leap," Leinwand said. "And in fact, I've laughed about this since, because I told her not to do it. I thought there was no chance it was going to work."

Riquelme didn't listen, and completed the rat heart-cell experiment anyway. It worked. The heart cells grew in a lab dish.

"That reinforced our desire to study the pythons," Leinwand said. "If we can understand this biology, it looks like we can use this in mammals."

The researchers began to hunt for the specific molecules that signal the heart to grow within the pythons' blood plasma. They eventually discovered a particular batch of fatty acids that seem to trigger a flood of heart-protecting enzymes to keep damage at bay. Next, the researchers hooked up mice to miniature pumps that injected them with low doses of this fatty-acid mixture over the course of a week.

Just as the rat heart cells had grown in the dish, the living mouse hearts grew, too. And there was no sign of the muscle stiffening that accompanies heart growth in patients with heart disease, the researchers report in the Oct. 28 issue of the journal Science.

The fatty-acid mixture is a long way from being used in human treatments, but the researchers are now testing it in mice with heart disease to see if they can halt or reverse the damage. Even if the treatment succeeds in mice, it may not work in humans. But other researchers say that the shared evolutionary history of all organisms offers some hope.

"It's a well-established pathway for discovery," said Tom Cech, a biochemist and Nobel laureate at UC Boulder who did not participate in Leinwand's study. "You look for an organism that exaggerates a particular phenomenon, and then you study it in that organism that exaggerates it. Because all of life is connected through evolution, very often results from other organisms are relevant to human biology."