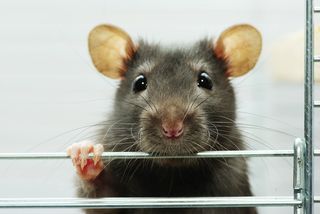 Rats exposed to antidepressants around birth have abnormal brain development, according to an October 2011 study.
(Image: © Pakhnyushcha, Shutterstock)

Rats exposed to antidepressants just before and after birth show brain abnormalities and strange behaviors reminiscent of autism, a new study finds.

Although the research is in animals, the study provides experimental evidence for a previously reported link between antidepressant use during pregnancy and autism in children. The study in rats found that when the developing animals were exposed to the serotonin-selective reuptake inhibitor (SSRI) citalopram during the critical period around the time they were born, they became excessively fearful when faced with new situations and failed to play normally with peers.

"Our findings underscore the importance of balanced serotonin levels — not too high or too low — for proper brain maturation," study researcher Rick Lin of the University of Mississippi Medical Center said in a statement.

Serotonin in the womb

Earlier studies had hinted that the brain chemical serotonin plays an important role in shaping the still-forming brain in the days just after a rat is born, which corresponds to the end of the third trimester of fetal development in humans. Manipulating the levels of this neurotransmitter during this period interfered with the formation of the sensory-processing regions of the brain. Serotonin changes also triggered aggressive and anxiety-related behaviors in rodents.

Other studies have found evidence that serotonin in the placenta helps shape the development of the human brain in early pregnancy. [Read: 11 Facts Parents Should Know About Baby's Brain]

Disrupted serotonin has been linked to mood and anxiety disorders. SSRIs, the mainstay medication treatment for these disorders, boost serotonin activity.

Currently, women with depression are urged to talk to their doctors about medication symptoms even before becoming pregnant, according to 2007 guidelines from the American College of Obstetricians and Gynecologists. Depression itself is associated with negative outcomes in pregnancy, including premature birth and low birth rate (also associated with autism), so the decision to halt medication must be weighed against the risk of a depression relapse. That decision must be made on a case-by-case basis.

Meanwhile, researchers reported in July in the journal Archives of General Psychiatry that prenatal exposure to antidepressants could double the risk of an autism spectrum disorder in humans. But because it's impossible to experiment on pregnant humans, researchers turned to rats to investigate the brain changes that might be behind this association.

Lin and his colleagues exposed male and female rat pups to the SSRI drug called citalopram just before and after birth and examined the animals' brains and behaviors as they grew into adulthood. Male, but not female, SSRI-exposed rat pups abnormally froze when they heard an unfamiliar tone and balked at exploring their environment in the presence of unfamiliar objects or scents. These behaviors persisted into adulthood. The male pups especially also shunned normal juvenile play behavior — mimicking traits often seen in children with autism.

The gender split among the rats also mimics a feature of autism, which affects three to four times more boys than girls.

A key brain serotonin circuit known as the raphe system, showed a dramatic reduction in the density of nerve fibers in the SSRI-exposed rats. This system is known to shape the developing brain during the period when the rats were exposed to the drug. The stunted development, possibly a reasult of the change in the raphe system, affected a number of brain regions, including much of the cortex and hippocampus, which are involved in memory and navigation.

The researchers also discovered bad wiring in the structure responsible for communications between the brain's left and right hemispheres, called the corpus callosum. Neurons send their signals along extensions called axons, and in SSRI-exposed rats, those axons were deformed.

A protective sheath, called myelin, that normally wraps around and boosts the efficiency of information travel along axons — like insulation on an electrical wire — was reduced by one-third in the treated animals. This damage was three times worse in male than in female pups and would likely result in abnormal communication between the two hemispheres, according to Lin and his colleagues.

The animals exposed to the drug also had neurons that signaled out of sync, suggesting an organization problem among networks of brain cells.

The researchers report their results online Monday (Oct. 24) in the journal Proceedings of the National Academy of Sciences.

"While one must always be cautious extrapolating from medication effects in rats to medication effects in people, these new results suggest an opportunity to study the mechanisms by which antidepressants influence brain and behavioral development," said Thomas Insel, director of the National Institute of Mental Health (NIMH). Insel was not involved in the study, which was partially funded by the NIMH. "These studies will help to balance the mental health needs of pregnant mothers with possible increased risk to their offspring."