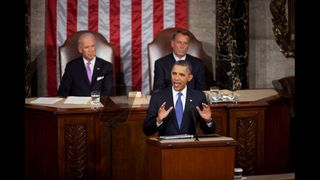 When asked by a member of the press recently about his steadily graying hair, President Obama blamed the color change on his genes rather than the stress of his job.

"My grandfather was gray by the time he was 29. ... So I figured it was going to come. It just happened to coincide with the presidency," Obama said, according to ABC News.

While it may sound like he's just playing it cool, biologists say that Obama's statement is mostly true: Heredity is the dominant factor controlling the graying process. In fact, the 50-year-old President's genes are typical: A 2005 review article in The Journal of Investigative Dermatology reported that Caucasians start to go gray in their mid-30s, on average, Asians in their late-30s, and Africans in their mid-40s. (Obama, whose mother was Caucasian and father was African, started showing signs of graying hair in his 40s.)

However, experts disagree on whether stress takes a toll on your tresses, too.

Though the details remain fuzzy, the basic theory of graying holds that hairs turn gray as the follicles where they grow get older, and, gradually, fall out-of-whack. Follicles undergo 10 to 30 reproductive cycles during a person's lifetime, and in each subsequent stage, they produce less of an enzyme called catalase. Catalase is important because it breaks down another chemical that is also naturally produced by cells inside hair follicles: hydrogen peroxide — the same stuff that "peroxide blondes" use to whiten their coiffures. Because older people have less catalase to break it down, excess peroxide in each of their hair follicles has free reign to bleach the local strand of hair. [Why Do Men Go Bald?]

According to biologist Gerald Weissmann, editor-in-chief of the experimental-biology publication FASEB Journal, "not a shred of evidence" has been reported in the scientific literature to suggest that stress — be it of presidential proportions or otherwise — speeds up the rate at which hair follicles age, despite widespread beliefs to the contrary.

"Look at the hair of the young folks in Egypt or Libya (on either side of those conflicts) or of that poor young Israeli soldier. Not gray despite horrific 'stress,'" Weissmann told Life's Little Mysteries. "Genes, genes, genes, I'm afraid, are the answer."

However, not everyone concurs with Weissmann's assertion. Andrzej Slominski, a dermatopathologist at the University of Tennessee Health Science Center, agrees that genes have the strongest influence on the age at which you gray, but says there is "firm evidence" that environmental factors such as stress also contribute. "There is a connection between stress and graying. This phenomenon was described in particular during the Second World War with soldiers who had sudden graying or even overnight graying," Slominski said.

Though such anecdotal evidence suggests that stress does somehow turn hair gray, "the mechanism is unclear," Slominski said, noting that it may be a different process than age-induced graying (as described above). Ralf Paus, of the University of Luebeck, has hypothesized that stress hormones may lead to the production of free radicals. These in turn may damage melanocytes — the pigment-producing cells in hair follicles that give hair its color.

Stress is well-known to affect other bodily processes, such as suppressing the immune system, causing digestive problems and raising blood pressure. Paus and others are looking into exactly how it might impact hair follicles, too. [Stress Off-Switch Found]

Eventually scientists will be able to say for certain whether President Obama has more gray hairs today than he would have had if had he spent the past few years lounging poolside in Hawaii, instead of butting heads with Republicans in Washington.