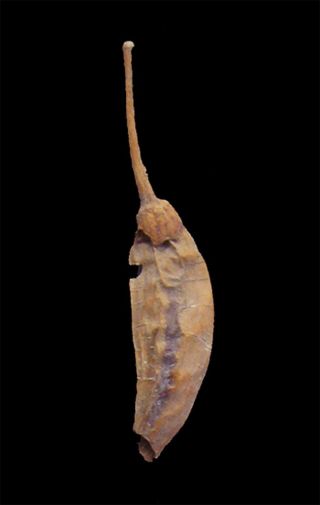 Shriveled peppers preserved for 1,500 years in two caves in southern Mexico are giving scientists a real taste of pre-Columbian agriculture and the spicy fare it yielded.

The desiccated chilies belong to Capsicum annum, which includes modern-day jalapenos and ancho peppers, and Capsicum frutescens, whose most famous member is the Tabasco pepper. Two of the peppers look similar to today’s Tabasco and cayenne varieties.

The plant remains, described today online in the journal Proceedings of the National Academy of Sciences, were discovered in Guila Naquiz and Silvia’s Cave, two dry rock shelters in the Valley of Oaxaca in southern Mexico. They were so well-preserved that researchers were able to distinguish seven cultivated types from Guila Naquitz and three from Silvia’s Cave.

Perry and archaeologist Kent Flannery of the University of Michigan analyzed the remains to find not only a variety of pepper types but also clues suggesting the people used both fresh and dried peppers to whip up an array of spicy foods.

Experiments with modern peppers yielded this insight: Perry, an archaeobotanist, discovered that if the peppers had been fresh back in the day, they would have a clean line where the pepper was cut from its stem. Dried peppers would end up with a “messy” tear when being prepared for a cuisine.

The aridity of the caves is what kept the spicy foods from decay. From around 500 to 1,500 A.D., the scientists suggest, the caves served as temporary camps and food-storage areas for the farmers from the nearby ancient city of Mitla.

The diverse locations of the remains indicate the Zapotec-speaking people planted crops in several areas, including river bottoms, piedmonts and mountains.

“It shows a very intimate knowledge of the landscape, because they were using all sorts of different areas for cultivating, up and down hillsides,” Perry told LiveScience, “probably to mitigate risk if you lose your crops in one area there’s something in another that’s going to be OK.”