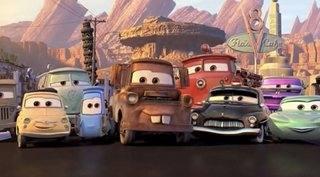 Do cars have "personalities" like Lightning McQueen or Mater from "Cars"?
(Image: © Disney Pixar)

Is your car an adult or a child? Male or female? Friendly or hostile?

Asking these questions about a hunk of metal and glass may seem nonsensical, but a new study shows that people attribute facial features and humanlike traits to automobiles, even in areas where car advertisements and anthropomorphic auto movies such as Disney Pixar's "Cars" are almost nonexistent.

The findings are additional evidence that humans are evolutionarily predisposed to see faces in everything, said study researcher Sonja Windhager, an anthropologist at the University of Vienna. This tendency likely would have protected our ancestors, Windhager told LiveScience.

"Taking a bear for a stone might be lethal, whereas the opposite does no harm," she said. "As a result, we are tempted to see faces everywhere, even in clouds, stones and cars."

Our preferences for curvy cars may have links to our evolutionary past as well, research has suggested, though the human love of novelty sometimes pushes boxy, sharp-angled vehicles into the limelight. [10 Things That Make Humans Special]

Windhager and her colleagues had studied this tendency to personify cars in Austria, reporting in 2008 that people attribute human traits to vehicles based on factors such as the shape of the headlights and the size of the windshield. Car fronts are symmetrical and even have "eyes" (the headlights) and "ears" (the side mirrors), so it made sense that people would anthropomorphize them, the researchers said. Movies ranging from 1968's "The Love Bug," starring a Volkswagen Beetle, to 2006's "Cars," starring a rookie racecar, have mined these features, Windhager said.

But in Austria and most of the western world, people are inundated not only with "talking cars" in movies but also loads of car ads that could skew people's perceptions of a given brand's "personality." So the researchers headed to rural Ethiopia, where car advertisements are nearly nonexistent and few people own vehicles.

The researchers asked a total of 89 rural Ethiopians and another 40 Austrians to rate 46 different renderings of cars on 19 different human traits, including gender, friendliness, arrogance and other personality and emotional states.

The research revealed that both Austrians and Ethiopians looked at cars in the same way. One Ethiopian man, when asked whether he associated a human face, an animal face, or no face with cars, even said, "I do not know what to answer. Cars have their own faces!"

But humans judge those car faces by similar standards as human faces, the researchers found. Cars with slit-like, wide-set headlights were judged as "male," "adult" and "dominant," by both Austrians and Ethiopians, as were cars with smaller windshields. Typically, wider faces and smaller eyes and foreheads (the human equivalent of a car windshield) are considered to be more masculine features in human faces.

Just as humans associate bigger noses with older age, the study participants judged cars with bigger grilles as older, Windhager and her colleagues found. Wider lips are likewise associated with age; for cars, this translated into cars with wider air-intakes (below the grille) being seen as older.

The findings suggest a universality to the way humans view faces, the researchers report in an upcoming issue of the journal Evolution and Human Behavior. Next, they plan to research whether these judgments about car personality influence the way people drive or what car they choose to buy.