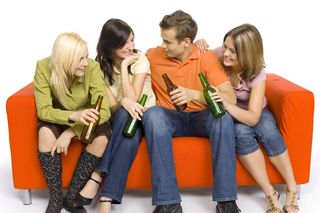 Teens who date older people, have sex and use drugs or alcohol think of themselves as older than they really are, according to a new study.

The findings suggest that when teens engage in "grown-up" behaviors, they feel closer to adulthood.

Previous research has shown that teens perceive themselves as slightly older than they really are—but that this trend begins to reverse when people reach their mid-20s, at which point they report feeling younger than they actually are.

To find out, they asked 664 teens ages 12 to 19 to gauge how old they felt and to answer questions about their dating and sexual experiences as well as whether they smoked, drank or used drugs.

On average, the teens reported feeling older than their actual age, and girls generally felt older than boys—possibly because they reach puberty sooner. The teens who felt the oldest compared to their biological years were more likely to be dating someone older than them and to have had sex before.

“Sexual experience is unequivocally the realm of adult behavior,” Arbeau said in a prepared statement. “So, when teens are having sex and their peers aren’t, it can make them feel more adult, more mature than their non-experienced counterparts.”

In addition, Arbeau and her team found that teens who used alcohol and drugs felt older than those who abstained. Interestingly, although smoking made the boys feel older, it had no effect on how old the girls felt. This could be because girls don't consider smoking to be a desirable habit, the authors wrote in their study, which is published in the June issue of the Journal of Adolescence.