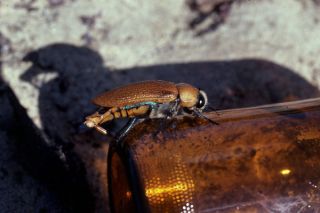 CAMBRIDGE, Mass.—The 2011 Ig Nobel Prize Ceremony, an annual event that honors off-the-wall (but still significant) scientific research, took place on Sept. 29 at Harvard University. This year's biology prize went to a pair of biologists who discovered that "a certain kind of beetle mates with a certain kind of Australian beer bottle," as their award stated.

We realize you may have some questions about this "discovery," so we caught up with the researchers, David Rentz from Kuranda, Australia, and Darryl Gwynne of the University of Toronto, to find out more.

Life's Little Mysteries: Tell me about the study that won you this year's Ig Nobel Biology Prize.

Darryl Gwynne: We did this study in Australia 20-plus years ago. David and I have been waiting by the phone for two decades for the phone to ring, and it finally happened.

David Rentz: It was called "beetles on the bottle," and it was a serendipitous study where we just observed large male beetles in Western Australia trying to mate with discarded beer bottles along the side of the road.

LLM: Did you find out why they were doing such a thing?

DG: We were actually doing research on a different topic altogether, and near our field camp one morning, we saw these beer bottles with these beetles clearly trying to mate with the bottles, because their penises were clearly prodding away at the back end of the bottle. And it was obviously of interest, amusing in one sense, but also it made us think. [The Weirdest Animal Penises]

I study sex differences theory, Darwinian sexual selection, and one of the clear glaring patterns about animals is that there are a number of examples of males making mating errors. Females never — I've never heard an example of a female making an error. So here's a male making a clear mating error and the theory behind it is that sperm's cheap. Males can afford to, once in a while, you know, basically make a mistake. Females no, because reproduction is much more expensive for females. But there is another angle to this story. A sad angle…

DR: These beetles were being dragged off the bottles by predatory ants that were on the ground. And so some of the more attractive bottles had bits and pieces of many beetles on the ground.

LLM: What was it about the bottles that you thought might be particularly appealing to these beetles?

DR: The color, I think. The brown color of the beer bottle simulates the color of a female beetle.

DG: Yeah, the old "stubby" bottle that they had in Western Australia, had a series of little tiny tubercles around the base that probably prevents slippage of the beer from the hand. Those reflected light in a similar way to the wing covers of the female, which were not only brown and shiny like the bottle, but they were reflecting light because they have these dimples in them, very much like the bottles. So we surmised that that was what was going on. [Burp-Free Space Beer]

LLM: Does this beer bottle attraction pose a real problem for the beetles?

DG: So at least one conservation biology textbook has referred to our research as a classic case of an "evolutionary trap," in the sense that the male beetles have evolved over millions of years to prefer the largest brown female they can find, because bigger females have more eggs. And along come humans, chucking beer bottles out, and this stimulus has completely disrupted their [mating behavior]. You take the males off the bottles, throw out more bottles, and more males come in, and the poor females are probably losing mates as a consequence.

LLM: Did you take steps to try and save the beetles?

DR: Darryl wrote a letter to the brewing company pointing this out, and subsequently — we never got an answer — but subsequently the beer bottles that you find on the ground today don't have those little tubercles around the base, so perhaps they modified it slightly.

DG: There was a program about insect behavior that had our research as a part of it and they claimed on that that the Swan Brewery modified their beer bottle in response to this research, but we haven't been able to verify that.

LLM: Well, finally you're getting the recognition that you deserve!