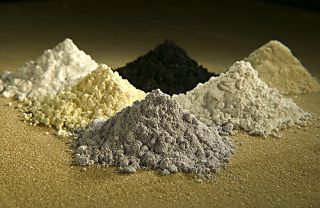 Recent exploration of rare volcanic rocks in the rugged, dangerous desert of southern Afghanistan has identified world-class concentrations of rare earth elements, the prized group of raw materials that are essential in the manufacture of many modern technologies, from electric cars to solar panels. So far, geologists say, they have mapped one million metric tons of these critical elements, which include lanthanum, cerium and neodymium. That's enough to supply the world's rare earth needs for 10 years based on current consumption, points out Robert Tucker, the U.S. Geological Survey (USGS) scientist who is the lead author on a report released on September 14. And from clues his team gathered during three high-security reconnaissance missions to the site, he suspects the deposit is actually much larger. "I fully expect that our estimates are conservative," Tucker told Scientific American. "With more time, and with more people doing proper exploration, it could become a major, major discovery." The USGS's exploration time has been strictly limited due to the deposit's location in the most dangerous part of the country, near the southern border with Pakistan. The geologists were delivered to the site in Black Hawk helicopters, and armed soldiers watched over them as they scoured the ground for clues. "It's one of the most challenging things I've ever done," Tucker says. "Walking around with 30 to 40 pounds of protective gear is very difficult." But even the rushed, conservative estimate for the tonnage of this single deposit puts Afghanistan sixth on a list of countries with the largest rare earth reserves. (China ranks first with about 50 million metric tons and U.S. reserves are around 12 million metric tons.) Already, then, Afghanistan could provide an alternative source of rare earth elements for industrial countries concerned that China currently controls 97 percent of the world's supply, Tucker says. Chemical analyses of rock samples his team collected in February show that the concentration of so-called light rare earth elements in the Afghan deposit are on par with the premier site mined in China, at Bayan Obo in Inner Mongolia. The new rare earth findings are a crown jewel of the USGS's new, 2,000-page assessment of Afghanistan's vast mineral bounty, which will be rolled out September 29 at the Afghan embassy in Washington, D.C. This new science, funded by the Pentagon's Task Force for Business and Stability Operations, also characterizes 24 areas of economic interest, half a dozen of which are world-class mineral deposits in the northern two thirds of the country. Vast deposits of copper and iron in the northeast near the nation's capital, Kabul, are together worth hundreds of billions of dollars. The Afghanistan Ministry of Mines has already tendered an exploration lease for a copper prospect called Aynak, in Logar Province, and they plan to do the same for several additional sites in the coming months, including a massive iron ore deposit valued at $420 billion. The hope of senior government officials in both countries is that tapping Afghanistan's underground wealth could transform it from one of the world's poorest nations into a prosperous major global mining center. The plan is to get iron and copper mining established in the north, where the risk of violence is lower, with an eye toward eventually opening up the rare earth deposit in the south. In addition to security, the Afghans still need an expanded electrical grid to power machinery as well as a railroad to ship ore out of the country, says Stephen Peters, the USGS minerals team leader for the Afghanistan project. But he adds that the rare earth deposit, near the village of Khan Neshin in Helmand Province, offers the added incentive of minable quantities of uranium, thorium, phosphate and limestone for cement. Peters published preliminary estimates about Afghanistan's rare earth elements in 2007. But those guesses were made sight unseen, based on a careful compilation of unpublished Soviet field notes conducted in partnership with the Afghanistan Geological Survey. To get beyond guesswork, Peters and Tucker knew they had to hike the rugged hills. The task force arranged for military transport and protection during three brief excursions to Khan Neshin in 2010 and 2011. When the team finally crossed the mineralized zone on their second trip, he knew they had hit pay dirt. The principal ore mineral turned out to be canary-yellow bastnasite, the same mineral that harbors most of the world and U.S. rare earth reserves. "The signs were everywhere," Tucker describes. "There were canary yellow minerals, speckled rocks in the ground—it was unlike anything I'd ever seen. It was exhilarating to make this kind of discovery, particularly in such difficult circumstances." The $7.4-billion estimate for the rare earths at Khan Neshin assumes, very conservatively, that the rock is only 150 meters thick. That was all Tucker and Peters could see during their brief visits, but it could easily be thicker. The rare earth–bearing rocks at Khan Neshin are very young in geologic terms, less than 600,000 years old, which gives Tucker strong reason to think that rich portions of the deposit extend deep underground. For comparison, the same type of volcanic rocks once mined for rare earths near Mountain Pass, Calif., are 1.4 billion years old, and so natural forces of erosion have had much more time to whittle away at them. Ideally, geophysicists would generate three-dimensional views of the rock beneath the rare earth deposit Tucker and Peters visited by charting the region's magnetism and other properties with equipment carried on foot or in a low-flying plane. Likewise, geologists could dig trenches across the deposit and drill deep into it to help resolve the details of the formation's third dimension. Alas, the USGS has no plans to send its scientists back to Khan Neshin anytime soon. The agency's Pentagon funding has run out, and it is simply too dangerous for Americans to go again without military protection. But Afghan scientists the USGS has been training for the past eight years can move more freely. Recently equipped with hand-held equipment for doing the geophysical surveys, perhaps they can finish the job.