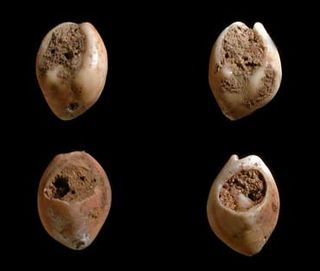 Some of the twelve shell beads dated to 80,000 years ago discovered in Morocco. Ã‚Â© Ian Cartwright

Even the very first modern humans may have spruced themselves up with beaded bling.

Twelve shell beads discovered in a cave in eastern Morocco have been dated at more than 80,000 years old, making them one of the earliest examples of human culture. The beads are colored with red ochre and show signs of being strung together.

Similar beads have been found in other parts of Africa and the Middle East, suggesting the first Homo sapiens literally carried their penchant for baubles with them as they populated the world.

"If you draw a triangle covering the three furthest known locations of Homo sapiens between 75,000–120,000 years ago, that triangle stretches from South Africa to Morocco to Israel," said study co-author Chris Stringer of London's Natural History Museum.

"Shell beads are now known at all three points of that triangle," Stringer added. "So such behavior had probably spread right across the early human range by this time, and would have been carried by modern humans as they dispersed from Africa in the last 100,000 years."

The findings are detailed in a recent issue of the Proceedings of the National Academy of Sciences. Oxford University's Institute of Archaeology and Morocco's National Institute for Archaeological Sciences led the project.

The beads found in Morocco aren't the oldest in existence. That title belongs to two tiny shells discovered in Israel in the 1930s and dated at 100,000 years old. The shells are pierced with holes and were probably also hung as pendants or necklaces, archaeologists say.

Combined, the finds hint at the extent of the culture and symbolism being practiced by the earliest modern humans. Art and decoration like the beads are considered good indicators of how human behavior evolved from Africa to other parts of the globe.

"A major question in evolutionary studies today is 'how early did humans begin to think and behave in ways we would see as fundamentally modern?'," said co-author Nick Barton of Oxford University. "The appearance of ornaments such as these may be linked to a growing sense of self-awareness and identity among humans."

Some researchers have suggested that humans didn't become culturally modern until they reached Europe about 35,000 years ago. But Europe, which doesn't show evidence of similar jewelry or customs until much later, actually lagged behind in cultural development, Stringer said.

"This research shows that a long lasting and widespread bead-working tradition associated with early modern humans extended through Africa to the Middle East well before comparable evidence appears in Europe," Stringer said in a 2006 prepared statement, commenting on the just-released, very ancient dates for the Israeli beads.

"Modern human anatomy and behavior have deep roots in Africa and were widespread by 75,000 years ago, even though they may not have appeared in Europe for another 35,000 years," he said.