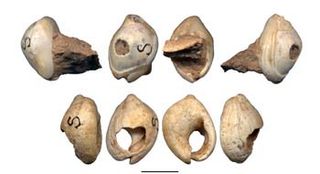 WASHINGTON (AP)—Ancient beads that may represent the oldest attempt by people at self-decoration have been identified from sites in Algeria and Israel.

The beads, made from shells with holes bored into them, date to around 100,000 years ago, some 25,000 years older than similar beads discovered two years ago in South Africa, researchers report in Friday's issue of the journal Science.

"Our paper supports the scenario that modern humans in Africa developed behaviors that are considered modern quite early in time, so that in fact these people were probably not just biologically modern but also culturally and cognitively modern, at least to some degree,'' said study co-author Francesco d'Errico of the National Center for Scientific Research in Talence, France.

In the past some researchers have argued that the ability to use symbolism did not develop until people had migrated to Europe some 35,000 to 40,000 years ago.

That this find is older than the beads uncovered in South Africa "does not surprise me,'' she said in a telephone interview. "There were no revolutions in human behavior, there was a gradual accumulation of behaviors.''

The perforated shells from Blombos in South Africa and those now coming to light are of the same genus, Nassarius, she noted.

"So, the question is, is this a single cultural tradition? Probably not,'' she concluded. "Clearly it's learned behavior.''

By the time people were populating Europe, behavior had continued to develop and beads were being made from teeth, bone, stone, "every sort of material,'' said Brooks, who was not part of the research team. "It just is improbable that that sprang from nothing, and this is a logical antecedent.''

Sally McBrearty, an anthropology professor at the University of Connecticut, also was pleased with the find extending the time range for such symbolic activity.

"It's the category of object that everybody is willing to accept as being something that signals modern behavior,'' McBrearty said. "It's not quite as wonderful as Blombos ... but it is fairly securely dated.'' McBrearty was not part of the research team.

The new find involves just three shells, two from Skhul in Israel the researchers said were about 100,000 years old and one from Oued Djebbana, Algeria, estimated to be 90,000 years old.

The researchers said the shells were found many miles from the sea, indicating they were brought to those locations deliberately, most likely for beadworking.

Brooks agreed, adding that the shells are too small to have had any food value.

"I think we're looking at symbolic value ... it's very exciting,'' she said.

D'Errico had been part of the group that found the earlier perforated shells at Blombos and he and other scientists were trying to find similar beads in other locations.

The newly identified shells were found in a study of museum collections.

The shells from Skhul were excavated in the 1930s. The researchers were able to date them by comparing sediment stuck to one of them with layers containing human skeletons that were 100,000 or more years old. The Algerian site was excavated in the 1940s and the researchers said the date of 90,000 years is based on the technology and style of the stone tools found there.

The research was funded by the European Science Foundation, the French Ministry of Research and the Fyssen Foundation.