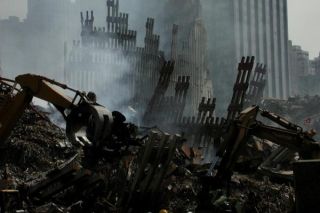 Ten years after Sept. 11, 2001, some of our most pressing questions remain unanswered.

When it comes to first responders who have been diagnosed with cancer, many have come to question whether it was their actions that day and over the weeks following that led to their illness. Recent reports stating that there isn't evidence that 9/11 caused cancer have raised frustrations: Despite advances in cancer treatment, finding the disease's actual culprits seems as elusive as ever.

While the destruction of the twin towers was a unique event, the task of finding if an event caused cancer is one that has vexed researchers in numerous cases.

"It would be great in cancer prevention if we could say, it is 'this' factor," said Thomas Burke, a professor of healthy policy and management in the Bloomberg School of Public Health at Johns Hopkins University, as well as the school of medicine's department of oncology.

"In environmental epidemiology, it is very difficult to prove cause-effect, so what we're looking for is increased risk," he said.

However, "it is also impossible to prove a negative," Burke said, so researchers could never definitively show that ground zero dust hasn't caused cancer.

"Certainty is impossible," Burke said. "And so, therefore, we have to have other considerations when we make judgments when determining whether something is site-related."

Searching for cancer's cause

The Zadroga bill, signed into law in January, was designed to follow up on — and in some cases, cover — the costs of health problems of people affected by the World Trade Center's destruction.

Following a report in July from the National Institute for Occupational Safety and Health (NIOSH) on studies following up from 9/11, it was determined that the bill would not, at this point, cover cancer care, because of a lack of evidence of a connection.

Dr. John Howard, administrator at NIOSH, said in a statement accompanying the report that a final determination could not yet be made as to whether the terrorist attacks caused cancer.

Last Thursday, a study published in the medical journal The Lancet showed that while there wasa 19 percent increase in certain cancers among first responders exposed to the attacks, the numbers were not statistically significant — meaning that increase may have been due to chance.

"We remain cautious in our interpretation of this finding," concluded the researchers, affiliated with Montefiore Medical Center and the Fire Department of the City of New York.

NIOSH, which also provided funding for the Lancet study, will be reviewing data again next year.

"We will incorporate the FDNY study in our second review of the peer-reviewed literature. We expect to do the review in early- to mid-2012," Fred Blosser, a NIOSH spokesman, told MyHealthNewsDaily.

"We know cancer biology is really complex, because it depends upon genetics, it depends upon behaviors, and it depends upon environmental factors," Burke said. "This is why investigating cancer clusters is so, so difficult, and there is so little likelihood that you'll identify a single cause. There is a web of cancer causation, and we have to understand that."

Ultimately, that web catches up with many of us. Roughly one in two men get cancer, one in three women get it, and one in four to five people will die from it.

"You're born with risks, your life accumulates risks, and if there are exposures on top of that that increase that risk, your level of risk goes up," Burke said.

Of course, your genes, behavior and environment can work in your favor as well, he said. Some people have genes that help them better repair their DNA, making cancer less likely. This adds another wrinkle in trying to get a handle on cancer causation.

"When you know that someone has been exposed to an agent, or been through an experience that may increase their risk by damaging genetic material in the cells, it is also impossible to say that exposure did not have some effect on those people," Burke said.

This impossibility is addressed in the Zadroga bill for other health conditions — the bill allows for people to claim compensation for medical costs, without the need to prove their condition was caused by 9/11.

However, covering the responders' cancers would be more difficult, experts say. Cancer takes years to develop, and so cases that followed immediately would have been unrelated.

And covering cancer care without evidence of its cause would have presented its own problem, they say.

"It would be scientifically not appropriate to attribute cancer in everyone that was ever down there to that exposure," said Regina Santella, a professor of environmental health sciences at the Mailman School of Public Health at Columbia University. "Half of those individuals are going to get cancer anyway, even if they had never been in lower Manhattan."

What should researchers be looking for?

Going forward, determining if 9/11 caused any cancers will be difficult, she said. "There's very few cancer clusters that have been shown to be true," Santella said. "Most of them have been a result of statistical variation."

In looking for answer, there are a number of factors to be considered.

"It would be good if [study participants] were representative of all the different types of people who were exposed," Santella said.

Some studies, for example, have been criticized because they've targeted people who became ill, rather than all responders, which is likely to result in a biased study.

Santella said researchers also need to find a way to measure individuals' exposure to potential carcinogens — a study that tied those with the highest levels of exposure to the highest risk of cancer would strengthen the case that the site had cancer-causing agents.

But that may not prove conclusive.

"For some of the rare cancers, even after doing that, you may not have enough to have confidence in the data," Santella said. Meanwhile, because there are so many cases of lung and breast cancer in the general population, it could be difficult to detect a true rise above normal.

Burke said science alone isn't going to answer the questions of who should be compensated, because science can't give a definite answer on causation.

As a result, he said, it becomes a "difficult societal and social choice to decide what is included [in compensation]. Even with the most potent carcinogens… there are many more folks who don't get cancer than those who do."

He said, "With this kind of complicated scenario, we will never have our best science behind it."

Pass it on: Scientific studies may never conclusively show that Ground Zero dust raised the cancer risk of 9/11 responders; some experts say that social and ethical concerns should drive the decision including cancer coverage in the Zadroga bill.