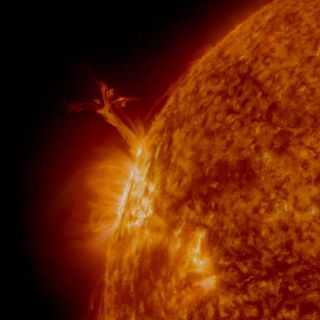 A stalk-like prominence rose up above the sun, then split into roughly four strands that twisted themselves into a knot and dispersed over a two-hour period (July 12, 2011). NASA's Solar Dynamics Observatory took a video of the sun twister.
(Image: © NASA/SDO/GSFC)

This image shows a solar prominence at the edge of the sun. A prominence is an arched, loop-shaped, exploding stream of solar plasma — a mixture of hot gas and charged particles — that shoots into space.

Prominences form from dense plasma clouds that have been caught in the sun's magnetic field lines and then break free with explosions. A prominence may shoot into space at speeds as high as about 800 miles/sec (1,300 km/sec), last for months and be hundreds of thousands of miles long.

Although most prominences eventually drop back into the sun, some prominences progress into full-fledged coronal mass ejections — massive balloon-shaped blasts from the sun containing highly charged gases and plasma. CMEs have the potential to disturb the Earth's magnetosphere, damage satellites, disrupt telecommunications, produce errors in GPS navigation systems, cause power blackouts, and expose polar airline flights to radiation. The prediction of such events is among the goals of space weather research.

Any opinions, findings, and conclusions or recommendations expressed in this material are those of the author and do not necessarily reflect the views of the National Science Foundation.  See the Research in Action archive.