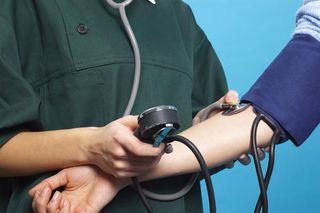 Half of the samples taken from the nurses' and doctors' uniforms harbored pathogens, including potentially dangerous bacteria such as multidrug-resistant MRSA.
(Image: © dreamstime)

If you cringe when you see people wearing medical scrubs while riding public transportation, your germaphobia may be warranted: More than 60 percent of uniforms worn by hospital nurses and doctors in Israel tested positive for potentially dangerous bacteria, a new study shows.

Researchers at the Shaare Zedek Medical Center in Jerusalem took swab samples from the uniforms of 75 registered nurses and 60 doctors. The samples were collected from each uniform's abdominal zone, sleeves' ends and pockets.

"It is important to put these study results into perspective," said Russell Olmsted, president of the Association for Professionals in Infection Control and Epidemiology, which published the study. "Any clothing that is worn by humans will become contaminated with microorganisms. The cornerstone of infection prevention remains the use of hand hygiene to prevent the movement of microbes from these surfaces to patients."

The researchers note that although the hospital staff's uniforms themselves may not pose a direct risk of disease transmission, the study results indicate a prevalence of antibiotic-resistant strains in close relation to patients who may have compromised or weakened immune systems.

Health care-associated infections  occur worldwide, and the risk of them striking patients is as much as 20 times higher in developing countries than in developed countries such as Israel and the United States, according to the World Health Organization. These infections can be deadly and are expensive to treat, so prevention is the best approach for patient safety, the researchers stated.

The findings are published in the September issue of the American Journal of Infection Control.