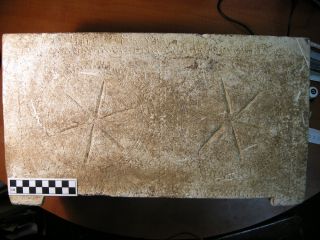 The ossuary thought to reveal the home of Caiaphas' family
(Image: © Yuval Goren)

An ancient burial box recovered from antiquities looters three years ago contains a mysterious inscription that could reveal the home of the family of the figure Caiaphas, who is infamous for his involvement in the biblical story of the crucifixion of Jesus.

The burial box, also called an ossuary, was discovered in 1990, but the inscription was just recently verified as legitimate (and not the result of forgers trying to increase an artifact's value) by Yuval Goren of Tel Aviv University and Boaz Zissu of Bar Ilan University. The box is made of limestone, is covered in decorative rosettes and has an inscription.

In the Bible story of Jesus' crucifixion, a Jewish high priest named Caiaphas is said to have organized the plot to kill Jesus.

(Differences in spellings between Caiaphus and Caiaphas and Beth Imri and Beit Imri, below, are due to alternate translations.)

The Maaziah refers to a clan that was one of 24 orders of high priests during the second temple period, Goren said. While there are some records of the Caiaphus family in Talmudic sources (the central texts of Judaism) that detail their lives after they spread into the Galilee in A.D. 70, the reference to Beit Imri gives new insight into the family's location prior to their migration. [See pictures of burial box]

It is possible that Beit Imri refers to another priestly order, the researchers said in a statement, but it more probably refers to a geographical location, likely that of Caiaphus' family's village of origin.

These ossuaries are traditionally buried in the ground and contain previously buried skeletal remains. Because they spend thousands of years in the ground, the researchers said they develop a distinct coating of microbes, algae and lichen, which can't be replicated by forgers.

"Beyond any reasonable doubt, the inscription is authentic," study researcher Goren said in a statement.

Previously discovered burial boxes, including one claiming to contain the bones of James, Jesus' brother, have been shown to be hoaxes. The researchers claim that the inconsistencies that plagued the box of James aren't present on this box.

The researchers aren't able to trace where the ossuary was discovered, since it had made the rounds in the illegal antiquities trade, but they believe it came from a burial site in the Valley of Elah, southwest of Jerusalem, the legendary location of the battle between David and Goliath. Beit Imri was probably located on the slopes of Mount Hebron, they said.

The finding was published in the current issue of the Israel Exploration Journal.