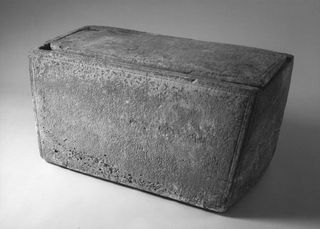 The ossuary that reputedly held the bones of James, Jesus' brother, with an inscription in Aramaic "James, son of Joseph, brother of Jesus'' is seen in this undated photo. The burial artifact that was discovered in Israel appears to be forged. Israeli police indicted four antiquities collectors and dealers Wednesday, Dec. 29, 2004 accusing them of running a sophisticated forgery ring that created a trove of fake biblical artifacts, including some hailed as among the most important archaeological objects ever uncovered in the region. According to a 17-page indictment, the members of the ring took genuine artifacts and added inscriptions to them, falsely increasing their importance and greatly inflating their value. (AP Photo/Shanks' Biblical Archaeology Review)

In late 2002, Israeli antiquities dealer Oded Golan publicly announced that he had acquired one of the most amazing religious artifacts ever found: an ossuary, a limestone receptacle commonly used in ancient times to inter human skeletal remains, with a remarkable epitaph in Aramaic: "James, Son of Joseph, Brother of Jesus." The inscription, if genuine, would have provided concrete archeological evidence about Jesus Christ and his family. Announced in a feature story in the Biblical Archaeology Review (BAR) and displayed at the Royal Ontario Museum (ROM) in Toronto in December 2002, the ossuary made news headlines around the world, and was the subject of the History Channel documentary "Secrets of the Ancient World: James: Brother of Jesus?".

Many were quick to declare this find, which quickly became known as the "James Ossuary," to be the archeological discovery of the millennium. Others, however, warned that no one should take a leap of faith. Such an extraordinary artifact might very well be a forgery and demanded extraordinary care in the confirmation of its authenticity.

Joe Nickell, investigative columnist for the magazine Skeptical Inquirer , warned early on of the suspicious lack of provenance and many questionable characteristics of the "James ossuary." After viewing the artifact at its Toronto exhibit in December 2002, he published a report in the March/April 2003 issue of the magazine. He was the first to argue from the preponderance of evidence that the ossuary may well be a forged inscription on an authentic, but otherwise unremarkable, bone box.

Nickell pointed out several suspicious facts that called into question the authenticity of the artifact. The patina of the inscription was questionable. Scholars were finding inconsistencies in the style of the lettering. A provenance was utterly lacking. (Golan said that he had bought the ossuary in the Old City [old Jerusalem] "in the 1970s," paying an Arab antiquities dealer he can no longer identify.)  Furthermore, Andre Lemaire, a French paleographic expert who collaborated with BAR in assessing the ossuary's authenticity, had originally claimed that the ossuary was otherwise unadorned. This claim was belied when Nickell observed rosettes on the side opposite the inscription during his inspection of the object in its exhibit at the ROM. That was a puzzling fact, given that ossuaries are usually decorated and inscribed on one side only. Moreover, the rosettes were badly worn with age, whereas the inscription has comparatively sharp edges. "Forgers frequently select genuine old artifacts upon which to inflict their handiwork," Nickell says, noting similar forgeries he has personally investigated and exposed, such as Daniel Boone muskets and the "Jack the Ripper" diary.

Nickell and others who called for caution have been vindicated by developments in the past two years. The Israeli Antiquities Authority (IAA) carefully examined the ossuary in 2003 after was shipped back to Israel from Canada. They found evidence of forgery, including a faked patina on the inscription. In late July 2003, Israeli police raided the Tel Aviv home of Golan. According to a 2003 Religion News Service (RNS) story, directly damning evidence was discovered in a rooftop storage room during the raid. "We found in this room other inscriptions and antiquities that appeared to be in various stages of being counterfeited," IAA officer Amir Ganor told the RNS. "We also found a lot of equipment for the process." They also found the James Ossuary stored in a bathroom sitting on a toilet, an odd place for such a significant archeological find.

The IAA investigation recently led to criminal indictments of the Golan, and three other men for running an antiquities forgery ring in December 2004.

"Oded Golan's indictment is sad news for every party that defended the ossuary's authenticity," says Nickell, who is author of Detecting Forgery. "There was a decided lack of healthy skepticism by many parties, including Hershel Shanks, editor of BAR; Andre Lemaire; and the ROM itself." In November 2002, the ROM brought the ossuary to Toronto, Canada, to coincide with three related scholarly conferences, including the convention of the Biblical Archaeology Society, publisher of BAR.

Nickell says that the ossuary's defenders turned science and the burden of proof upside down, jumping to the conclusion that the ossuary's inscription was authentic, sticking to their assumptions after new evidence came out, and demanding others to prove it a forgery.

One example of this premature defense can be found in the statements of a July 2003 ROM press release in reaction to the raid on Golan's home and his brief arrest:

"Until the ROM receives convincing evidence to the contrary, we stand by our opinion that the James Ossuary is not a forgery. We had a limited amount of time to study it because of the amount of conservation work that was required after the Ossuary arrived at the Museum after being damaged in transit. The studies that were carried out on the inscription and broken fragments of the Ossuary, however, satisfied the ROM's investigative team that it was an authentic artifact with an authentic inscription that might make it the Ossuary of James, the brother of Jesus."

Another example of rushing to judgment and stonewalling against later evidence is Herschel Shanks, who has ardently promoted the James Ossuary and defended Oded Golan. He has engaged in personal attacks on IAA staff and attempted to cast doubt on IAA reports. Shanks has only grudgingly acknowledge the possibility that the James Ossuary inscription is a forgery and that Oded Golan forged the it and many other artifacts. While his magazine touted the James Ossuary as a great archeological find in 2002, its position now is that it does not know whether the artifact is forged or Golan is a forger.

A responsible approach to the James Ossuary would have been to start with skepticism and wait for a consensus of several independent experts. Instead, Shanks, BAR, and the ROM jumped at their opportunity for publicity before giving science its opportunity to arrive at the truth.