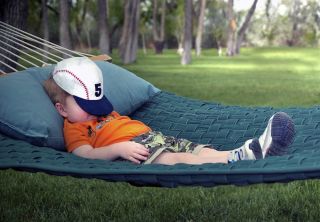 American pediatricians want to help their patients with sleep problems, but a new study finds that few have the proper knowledge and training to do so.

According to a national random survey of primary care pediatricians, only about 18 percent had ever received any formal training on sleep disorders and less than 20 percent answered more than half of eight basic questions about sleep issues correctly.

"Knowledge is lacking," said study researcher Ramalinga Reddy, a doctor at the Children's Pulmonary/Sleep Center at the Mercy Children's Hospital in Toledo, Ohio. Few medical schools and residency programs provide training in pediatric sleep problems, Reddy told LiveScience, despite the fact that 96 percent of pediatricians surveyed said they thought it was their duty to advise patients and families on sleep issues. [Read: Top 10 Spooky Sleep Disorders]

Reddy and his colleagues conducted the survey by mailing questionnaires to 700 general pediatricians who were members of the American Academy of Pediatrics. About half, or 349, responded, enabling the researchers to make inferences about the total population of American pediatricians with 95 percent confidence and a sampling error of plus or minus 5 percent.

The respondents answered questions about how much formal sleep disorder training they'd had and whether they screened their patients for sleep disorders. The responses showed that doctors often do reach out to their patients about sleep: Almost three-quarters regularly asked kids and their parents about sleep problems, and more than half also asked about bedtimes, bedwetting and snoring or sleep apnea.

But the pediatricians' knowledge of sleep problems was less robust. When asked eight basic true/false sleep questions, such as "school-age children who are sleepy should be encouraged to take at least one nap per day," only 19.1 percent scored five out of eight or above. The median, or middle score in the range, was around three correct answers. (By the way, the correct answer to the nap question above is "false.")

Those low scores and the lack of formal training is a problem, Reddy said, pointing out that sleep problems in children are linked to obesity, asthma and even greater risk-taking in teens. Many people believe that "sleep debts" during the week can be made up on the weekends, but research suggests that once sleep is lost, it's lost forever.

Pediatricians should have more formal training opportunities in sleep issues, starting in medical school and continuing throughout their careers, Reddy said. His institution has started holding regular half-hour lectures on sleep for pediatric residents.

But part of the problem is that talking sleep doesn't pay for doctors, Reddy said. One respondent reported lacking the time and resources to counsel parents on sleep routines for their children, as insurance companies reimburse for procedures, not doctor-patient conversations.

"Politicians and the health care industry need to look into this and provide the proper attention to sleep in children," Reddy said.

The researchers reported their results online today (Aug. 29) in the journal Pediatrics.