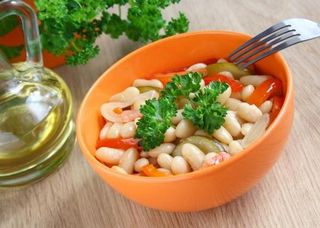 Since vegans don't eat animal products, they have to make sure to get healthy, complete proteins, such as rice and beans.
(Image: © Minadezhda | Dreamstime)

Former President Bill Clinton dropped another bombshell confession last week on CNN with the admission that he is... and I hope you are sitting down for this... a vegan.

He has tried tofu, tempeh and seitan, and he has inhaled. And the results have been spectacular:

Clinton, who had quadruple bypass surgery in 2004 to pay for the sins of his infamous meat-heavy and fat-heavy diet, has lost 24 pounds and has lowered his cholesterol levels dramatically since switching to veganism, or at least near veganism, in 2010. [7 Diet Tricks That Really Work]

This begs the question: Is veganism a superior dietary lifestyle?  The answer, to paraphrase Bill, is that it depends on what your definition of veganism is.

There's no universal definition of veganism, but for the most part this is a doctrine stating that humans should live without killing or exploiting animals. At a dietary level, this means no meat, eggs, milk and, for many vegans, even honey — because the bees are working for "the man."

There are ethical vegans, as well, who extend this principle to avoid all animal products, such as leather, beeswax candles, bone china porcelain and numerous other non-food items.

Bill Clinton appears to be a dietary vegan, concerned more about his own health than the health of any animal.

The reason for the latter scenario is twofold. Animal products are loaded with nutrients that are hard to obtain in adequate amounts through a plant-based diet. Also, the American culture in particular is so meat-focused that vegans in North America can have trouble preparing food that is satiating enough to keep one on such a diet.

In short, animal products provide high-quality protein, healthy omega-3 fatty acids (in fish, anyway), calcium, iron, zinc and vitamin B12.  As a vegan, as opposed to vegetarian, you cannot rely on milk, cheese and eggs to get some of these nutrients.  B12 is a particularly sticky issue for vegans, because it is only present in animal products, such as eggs.

This means that, as a vegan, you need to become skilled in preparing iron-rich and calcium-rich foods such as dark, leafy green vegetables; zinc-containing foods such as nuts and beans; foods rich in omega-3 fatty acids, for which there are few other than flaxseed; and a variety of protein-containing foods every day such as rice, beans and lentils, to be sure you are getting a complete protein.

Or you take a bunch of vitamin pills, as some vegans have to do.

Vegans from non-western cultures, or at least knowledgeable of such cultures, often have a more satisfying diet. Most Asians, for example, know how to prepare beans, lentils and other vegetables in such a way that the concept of "meat substitute" doesn't exist. Similarly in Japan and China, soymilk is soymilk with its own rich flavor and purpose; soymilk isn't a milk substitute to be processed in such a way to mimic the texture and nutritional profile of cow's milk.

Many Western vegan diets, on the other hand, attempt to imitate meat with soy burgers and strange vegetarian sausages, bacon and the like.  These foods tend to be heavy in salt and oil to compensate for their inherent bland taste.

Then there's the "I can't believe it isn't healthy" substitution phenomenon: vegans (and vegetarians) relying on almond "milk" without enough calcium to ward off osteoporosis; vegan cheese with only a tenth of the protein found in real cheese; and protein-bar meals devoid of complex carbohydrates, leading to roller-coaster blood sugar rides.

To argue that veganism is natural for humans is somewhat of a stretch, because of the vitamin B12 issue; our ancestors didn't have access to vitamin pills. And to argue veganism is morally superior is somewhat of an insult to ancient cultures such as the Inuit and numerous hunter-gatherer tribes who have an inherent respect for the land and water that supports them.

None of this should dissuade you from becoming a vegan. Yes, in some ways, eating meat is easier. And it can be healthier if you can't do the vegan thing properly. Of course, meat comes with its own baggage in the form of artery-clogging fats and cancer-causing byproducts.

Thus, we could all benefit considerably — in terms of helping personal health and the environment — by being a lot more vegan with an emphasis on self-preparation of whole foods.

Christopher Wanjek is the author of the books "Bad Medicine" and "Food At Work."