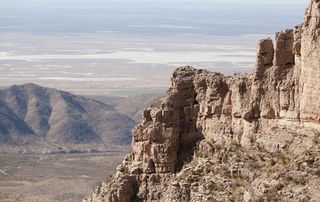 Clues about changes in sea level rise have been found in an unlikely place: the mountains of Texas.

Rocks from the fossil Permian Reef in the Guadalupe Mountains of West Texas reveal secrets about changes in sea level and marine life 265 million years ago, according to a new study.

Improved understanding of this ancient reef could shed light on the effects of environmental change on living systems, a concern for coral reefs in today's warming world.

Much like Australia's Great Barrier Reef, which stretches across more than 1,600 miles (2,754 kilometers) and is so large it can be seen from space, the Permian Reef was a massive reef that grew in shallow tropical waters 265 million years ago.

"The ancient reef grew in water just below sea level and it overlooked the Permian Basin, which was more than 1,000 feet [305 meters] deep," said study author Thomas Olszewski of Texas A&M in College Station. "The rocks at the foot of the mountains preserve sediments that record natural environmental changes caused by changing sea level and climate."

These valuable rocks can show a record of past events in Earth history, and in the Permian Reef geologists can clearly see evidence for numerous rises and falls of sea level, Olszewski said.

"Living organisms tend to be very sensitive to changes in their environment, and by examining the reef's fossil ecosystem, it is possible to piece together the way they changed over the millions of years it took for the sediments to accumulate," Olszewski said. "From the fossils preserved in these rock layers, we can get a good idea of how the ecosystems responded to environmental changes over millions of years."

The findings have been published in the journal Proceedings of the Royal Society B and Palaios.