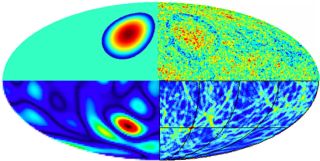 If multiple universes exist, they may collide with each other and leave behind signs in the cosmic microwave background radiation, researchers say.
(Image: © Stephen Feeney/UCL)

Is our universe just one of many? While the concept is bizarre, it's a real possibility, according to scientists who have devised the first test to investigate the idea.

The potential that we live in a multiverse arises from a theory called eternal inflation, which posits that shortly after the Big Bang that formed the universe, space-time expanded at different rates in different places, giving rise to bubble universes that may function with their own separate laws of physics.

The idea has seemed purely hypothetical, until now. In a new study, researchers suggest that if our universe has siblings, we may have bumped into them. Such collisions would have left lasting marks in the cosmic microwave background (CMB) radiation, the diffuse light left over from the Big Bang that pervades the universe, the researchers say.

"It brings the idea of eternal inflation and bubble collisions into the realm of testable science," said research team member Daniel Mortlock, an astrophysicist at Imperial College London. "If it's not testable, it's hard to even call it science." [Video: How to Remake the Big Bang]

Universes going bump in the night

Mortlock and the team, led by graduate student Stephen Feeney of University College London, searched the best available observations of the cosmic microwave background for signs of bubble universe collisions, but didn't find anything conclusive. If two universes had collided, the researchers say, it would have left a circular pattern behind in the cosmic microwave background.

"If you imagine two ordinary soap bubbles colliding, then the surface where they intersect is going to be a circle, so that's the key signature we're looking for in the CMB," Mortlock told SPACE.com. "It's not any old perturbation, it's circular and it's got a particular type of profile. There's no obvious sort of other thing that could cause this."

The researchers developed a computer algorithm to analyze CMB observations for patterns that would fit. In data from NASA's Wilkinson Microwave Anisotropy Probe (WMAP), the program found four regions in the universe that were flagged as promising. However, statistical analyses suggested these patterns were likely to be random, resembling the circular shapes of collisions simply by coincidence.

Data from the European Space Agency's Planck satellite, which launched in 2009, are expected to be far more detailed than those from WMAP. The Planck measurements are set to be released in 2013, and the researchers plan to look again, surveying in particular the four areas of interest from this study.

"I think the Feeney et al. paper is a great first step in trying to seriously look for signals of cosmological bubble collisions," said astrophysicist Thomas Levi of the University of British Columbia in Canada, who was not involved in the study. "While I believe the potential exists to detect the presence of other universes, the present data from WMAP is not likely to be precise enough to make a definitive statement. We will have to wait for data from future CMB experiments, such as the Planck satellite. The next few years could be quite exciting."

The idea of other universes out there is mind-bending, but scientists say in some ways it actually makes sense.

"It helps explain some of the strange coincidences about our own universe," Mortlock said. "Why is our universe so amenable to life?"

Many of the fundamental constants in our universe, such as the strength of gravity and the speed of light, seem perfectly calibrated to produce a universe in which galaxies, stars, planets and even life can form. If any of these constants had been tweaked at all, the universe would likely be empty, with no stars and no life.

But if our universe is one of many, then the fact that it's so perfectly tuned for life isn't such an unlikely coincidence. [7 Theories on the Origin of Life]

However, the possibility of multiple universes also comes with some unsettling implications. For example, some calculations suggest that a reality with infinite space and infinite universes would necessarily have to repeat itself sometimes, leading to the conclusion that copies of Earth and everyone on it exist somewhere else out there.

"Once you open up this can of worms, there's all sorts of very adventurous thinking on this sort of thing," Mortlock said. "If there's infinitely many universes, then surely there are other copies of you and me having this conversation. It's hard to think about, but it's hard to get around."