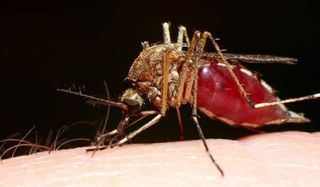 Cases of the severe form of West Nile virus rose in 2010, says a new report from the Centers for Disease Control and Prevention (CDC).

The number of reported neuroinvasive disease cases increased 62 percent from the number reported in 2009, the CDC said.

Among the neuroinvasive cases, more than half were reported from four states: Arizona (107 cases), New York (89), Texas (77) and California (72), the report said.

The number of cases can be affected by a number of factors, including interactions between the bugs that carry the virus, human behavior, environmental factors, and diagnostic testing and reporting practices, the CDC said. Therefore, it's hard to predict how many cases might occur in the future and in what areas.

People who want to reduce their risk should use measures to reduce their exposure to mosquitoes and ticks, such as using repellent and wearing long-sleeved shirts, the CDC said.

Since West Nile virus was first detected in the Western Hemisphere in 1999, it has become the leading cause in the U.S. of neuroinvasive disease among viruses transmitted by mosquito and tick bites, the report said.

Still, the vast majority infections are asymptomatic. Studies have shown that for every case of neuroinvasive West Nile virus infection, there are about 140 people infected with the virus. Of these, 80 percent are asymptomatic and 20 percent develop a less severe form of the disease. Older people are the most vulnerable to severe infections, the report said.

Common symptoms of West Nile virus infection include fever, headache, body aches and fatigue, according to the Mayo Clinic. Signs of severe infection include high fever, stiff neck, disorientation and sudden weakness in the arms, legs or breathing muscles.

Other viruses transmitted in the same way include California serogroup viruses, which caused 68 infections last year with one death, and St. Louis encephalitis virus, which caused 10 cases and one death, the CDC said.

In 2010, 88 percent of all such infections occurred during the months of July, August and September.

Pass it on: The number of severe West Nile virus infections increased in 2010, the Centers for Disease Control and Prevention said.