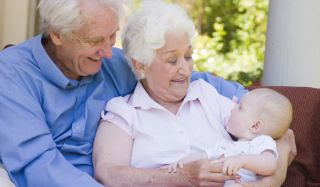 Researchers from Philadelphia looked at 1,302 crashes involving children 15 years old or younger from 2003 to 2007.

The risk of significant injury to children driven by grandparents was half that of parents.

The news comes despite the study also finding that grandparents were less likely to use proper child restraints.

That's concerning because "grandparents are a group who are involved in childcare activities at an increasing level," said study co-author Fred Henretig, an emergency department staff physician at Children's Hospital of Philadelphia.

The study will be published in the August issue of the journal Pediatrics.

Henretig was surprised by the findings. "My original hypothesis was that the injury rate is higher for grandparent drivers," he said.

Researchers used insurance claims and telephone interviews to collect the data, and calculated the risk of significant injury to children after adjusting for child, driver, vehicle and crash characteristics.

The researchers considered the injury "significant" if the child suffered a concussion or more serious brain injury, an injury to an internal organ, an injury to his or her spinal cord or a fracture of an extremity.

The surprising results might be attributed to grandparents who are especially cautious with this "precious cargo," Henretig said.

"I became a grandparent myself about three years ago," he told MyHealthNewsDaily. "My wife and I found that it's challenging and a little scary. The occasional responsibility to drive… is a little nerve racking."

Henretig said he guessed that grandparents are more focused on the task of driving and are "probably driving a little more slowly and keeping a little further distance from the car in front of them" along with other safe driving practices.

It could also be that grandparents drive with less urgency, or that they drive on back roads instead of on freeways, he said.

The study shows promise, but some questions remain, said Bruce Simons-Morton, chief of the Prevention Research Branch at the National Institute of Child Health and Human Development.

"The conclusion is perhaps overstated," Simons-Morton said. "In studies like this, it's difficult to control for factors that are important."

Those factors include the speed of the vehicle and the type of road, he said. "If you're a parent, you're probably going to let grandma and grandpa take your child on an easy trip."

Crash rates are much higher for teenage drivers and drivers over 75, Simons-Morton said. Because the median grandparent age was 58 in this study, "you would expect relatively safe driving," he said.

David Mooney, trauma medical director at Boston Children's Hospital, praised the study, but agreed that older grandparents probably aren't safer drivers. "There is a little bit of selection bias because, are you really going to let your 80-year-old grandmother drive your kid around?" he said.

More research is needed to find out why child injury rates are so much lower when grandparents are driving, Henretig said. "If you could learn from the grandparents what they're doing right and teach that, especially to the parents, that would have a huge public health impact," he said.

There's also the potential to lower the injury rate by teaching grandparents how to properly restrain children in vehicles, he said.

Pass it on: Children involved in car crashes suffer fewer significant injuries when their grandparents drive than when their parents drive. Grandparents could be even safer if they used proper child restraint techniques.