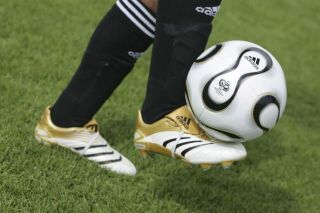 As the U.S. women's soccer team gets ready for its first World Cup final since 1999, sports fans are rediscovering some of the unique differences of how women play the game versus the men's side. Two recent studies point out one big difference; women are much less dramatic on the field.

While soccer is relatively free-flowing game, there are plenty of stoppages in play. Whether it be goal celebrations, substitutions or injuries, the game can get slowed down if players don't resume quickly. Martin Lames, a sports scientist at Technische Universitaet Muenchen, studied 56 men's and women's games and found that men seem to enjoy their time "on stage" during interruptions.

For example, when being substituted, men take almost 10 seconds longer to get off the field than women. After scoring a goal, women celebrate for an average of 30 seconds while men carry on for almost a full minute. At their dramatic best, when rolling on the ground with an injury (or feigning one), men stay down 30 seconds longer than women.

"In general, the differences can be interpreted as follows: For men the thought of staging themselves is much more pronounced than for women, where the game itself is obviously paramount," Lames says. "Putting on a show, play-acting and protesting are more typical of men. The reason for this could be that men's football generally pulls in more spectators and receives greater media coverage."

Malte Siegle, doctoral candidate and part of the research team, added that these differences may exist because men play-act as a form of gamesmanship. "We can even provide evidence that men use interruptions tactically. As many fans have conjectured, when they are in the lead, players take their time with injuries. Much more so than if the score is even, or when the other side is leading. This behavior cannot be observed in women's football." [How Caffeine Helps Athletes]

Of course, when fans talk about injuries in soccer, we're never quite sure if they're real or embellished. We've all had to watch one too many players rolling on the ground in agony, carried off on a stretcher and then magically sprint back on the field 30 seconds later, even in the women's game (i.e. Brazilian defender Erika in their semifinal match against the U.S.). In fact, it's so common that ESPN has even made a SportsCenter commercial that spoofs it.

So, who fakes more, men or women?

Dr. Daryl Rosenbaum, an assistant professor of Family and Community Medicine at Wake Forest University, wanted to find out. His team watched 47 women's games from two international tournaments and coded injuries as either "definite," meaning the player left the game for at least 5 minutes or was bleeding, or as "questionable," which is everything else. A total of 270 apparent injuries were recorded, or about 5.74 per game. Questionable injuries outnumbered definite injuries by a rate of 4.96 per game to 0.78 per game.

"While it was difficult to know for certain if a player had a true injury or was faking or embellishing, we found that only 13.7 percent of apparent injuries met our definition for a 'definite' injury," Rosenbaum said.

While roughly six fake or "simulated" injuries per game may seem high, the women don't come close to the rate the men achieved when Rosenbaum studied them in 2010. Almost a dozen, 11.26 to be exact, times per game a male player dropped to the field with what was deemed a questionable injury (one in which there was no blood and the player recovered in less than 5 minutes). Apparent injuries that were classified as "definite" were nearly twice as high for women, 13.7 percent, as compared to 7.2 percent for men.

"In the end, I think this study shows that women are less likely than men to fake soccer injuries," Rosenbaum said. "What isn't clear is if injury simulation is used to gain a tactical advantage. Only the players themselves know the answer to that question."

Actually, most of the fans probably know the answer, too.