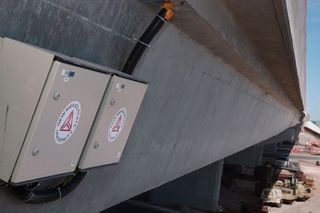 The average IQ of the nation's bridges may finally start to show some improvement. A new bridge in New Mexico has fiber optic sensors deep in its concrete beams that can presumably tell inspectors when and where it is feeling hazardous stresses.

The four-lane bridge, on Interstate-10 in Las Cruces, cost $6.3 million to build. It looks like any other bridge except that there's a refrigerator-sized box off to the side where data from 120 sensors is collected.

"The equipment wakes up four times a day to check on the bridge," said Rola Idriss, a professor of civilian engineering from New Mexico State University.

In comparison, federal law requires that regular old, dumb bridges be inspected at least once every two years. The visual inspections look for cracks or any other signs of deterioration. But the smart bridge technology can monitor the internal strains to warn inspectors of problems before they become visible.

Embedded all throughout the bridge's six 90-ton beams are fiber optic lines along which beams of light pass. This light will noticeably change if forces on the bridge start to stretch the lines.

Idriss and her team had considered using electrical wires instead of fiber optics, but they realized that there would be too much electromagnetic noise. "Fiber optics would give us a far cleaner signal," she said.

"Sometimes a bridge might look bad on the outside, but it could be structurally sound on the inside," Idriss said.

Whether the smart bridge technology will be cost-effective over the long run is what Idriss and her colleagues hope to find out with this early prototype. Engineers in places like California may one day put similar sensing devices in buildings to help them pinpoint possible damage following an earthquake.