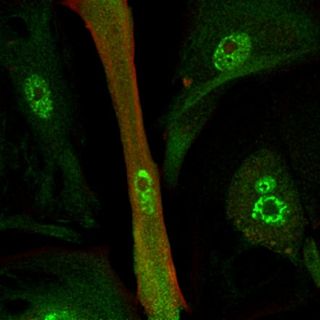 The cell in the center is a heart cell created from another type of cell using transferred RNA. It has the protein distribution (shown in green and red) indicative of a young heart-muscle cell.
(Image: © Tae Kyung Kim, PhD, Perelman School of Medicine, University of Pennsylvania)

Brain and skin cells have now been reprogrammed into heart cells using RNA, a molecule related to DNA that is crucial to the creation of proteins within a cell. This the first time a direct transformation of this type has been acheived using this technique.

In general, heart-muscle cells may help repair an injured heart by replacing lost tissue, making them intriguing to scientists who study how lost or damaged tissue or organs could be regenerated.

The team, led by Tae Kyung Kim of the Perelman School of Medicine at the University of Pennsylvania, extracted messenger RNA from a heart cell, and then flooded brain and skin cells with it. This mRNA contains the instructions, derived from DNA, to create proteins, the building blocks of cells. These cells then contained much more heart mRNA than skin or brain mRNA, causing the cell to build heart-cell proteins. The presence of the heart-cell proteins influenced the expression of genes and encouraged the production of more heart-cell proteins.

"What's new about this approach for heart-cell generation is that we directly converted one cell type to another using RNA, without an intermediate step," said James Eberwine, a professor of pharmacology at the University of Pennsylvania and a study researcher.

The researchers believe this technique has possibility for use in cell-based therapy for cardiovascular diseases. Heart cells created this way could be used to test treatments for heart disease and, if created from a particular patient, used to personalize treatment, according to the researchers.

Their work is detailed in the July 5 issue of the journal Proceedings of the National Academy of Sciences.