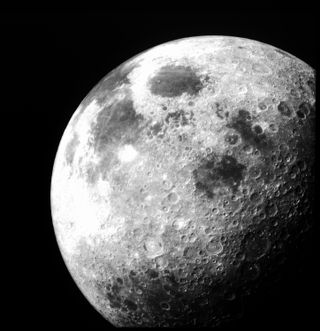 The seventh full moon of 2011 will rise around sunset this week, and it'll offer a double treat as it appears pretty much the same when it rises both Thursday and Friday evenings.

July's full moon is known as the Full Buck Moon, because it comes at the time of year when new antlers push out from the foreheads of buck deer. The moniker dates back to the Native American tribes that once lived in the northern and eastern United States.

Other names for July's full moon include the Full Thunder Moon, because thunderstorms are frequent in the summertime, and the Full Hay Moon.

In fact, the moon is considered full only at the moment when the sun, Earth and moon line up with one another in as straight a line as possible. On the rare occasions when the trio fall into a very straight line, the Earth's shadow falls directly on the moon, creating a lunar eclipse. But because the moon's orbit is slightly tilted, eclipses don't come around every month. [Photos: The Long Lunar Eclipse of June 15, 2011]

The official time for this month's full moon is 2:40 a.m. EDT (6:40 a.m. GMT). The full moon takes place at the same time worldwide, but the clock time differs by time zone. Because the timing this month is not near either Thursday evening or Friday evening, to the naked eye, the moon will look pretty much full as it rises both evenings, around sunset.

July, by the way, is an important month in lunar history: It was on July 20, 1969, that Neil Armstrong became the first person to set foot on the surface of the moon. He and Edwin "Buzz" Aldrin spent 2½ hours exploring the lunar landscape.

Shows in the night sky

The full moon is often a pain to amateur astronomers seeking other heavenly bodies. By contrast, a new moon gives those other bodies their chance to shine. New moons occur when the moon lies beneath the Earth and sun, with the unilluminated side of the moon facing the Earth.

This month's new moon comes at a good time: the night of July 30, just one day after the southern Delta Aquarid meteor shower reaches its maximum. This meteor shower occurs over a period of time from July 14 to Aug. 18. For observers in the Northern Hemisphere, meteors can usually be seen moving east, north and west above the southern horizon. With only a sliver of light left from the waning moon, the night sky July 29 should be nice and dark for meteor watchers.