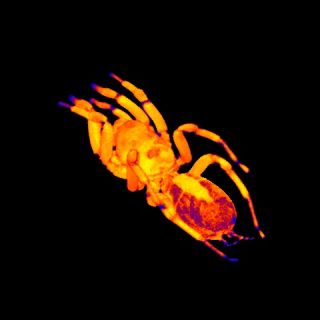 An MRI scan of a tarantula. The heart is in the spider's abdomen, shown here as an elongated yellow region.
(Image: © Gavin Merrifield)

Researchers have recorded the first real-time images of a tarantula's heart beating.

"In the videos, you can see the blood flowing through the heart, and tantalizingly, it looks as though there might be 'double beating' occurring, a distinct type of contraction which has never been considered before," Merrifield said in a statement.

The MRI allowed researchers to measure the spider's heart rate and cardiac output (how much blood it pumps per beat) noninvasively as part of an ongoing study of tarantula biology. [See images of the tarantula's heart]

"One potential practical use of this research is to ascertain the chemical composition of spider venom. Venom has applications in agriculture as a potential natural pesticide," Merrifield said.

"On the more academic side of things, if we can link MRI brain scans with a spider's behavior and combine this with similar data from vertebrates, we may clarify how intelligence evolved."