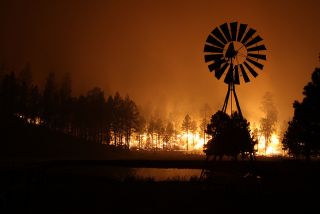 The Wallow Fire in Arizona is the largest in state history, and has scorched more than 532,000 acres. And although firefighters have the blaze more than 65 percent contained, once the flames are finally extinguished the danger may not be over.

"Monsoon" season is on the way, and instead of providing sweet relief for a region in the grip of a years-long drought, the coming rain could spell disaster, bringing a spate of landslides and floods to the parched and burned landscape.

"It's kind of a one-two punch sort of thing," said Ken Waters, the aptly named warning coordination meteorologist with the National Weather Service in Phoenix. "You always have problems with runoff after a big fire."

More than a decade of drought conditions had already robbed the region's soil, grasses and trees of moisture, providing the perfect fuel for fires,which have burned intense and hot in many places, said Stan Hinatsu, an information office with one of the fire crews camped out in Reserve, N.M., about a half-hour's drive from the Wallow Fire.

"This fire is huge," Hinatsu said, "and it's burned through everything" — from grasslands at lower elevations to junipers at mid-elevations to high, thick stands of ponderosa pine that burned fiercely.

Waters explained that the effects of the drought, compounded with the lost plant cover, means the exposed, bone-dry soil won't be able to absorb rains when they do come.

"The water comes down and it immediately runs off, like a big sheet of metal," Waters said.

The problem is particularly pronounced in mountainous areas, and so far it is the alpine regions of the fire, along its southeastern edge, that have proved most challenging to control, Hinatsu said.

"The fire is in tough terrain," Hinatsu told OurAmazingPlant. "The topography is very steep, mountainous country, and we're at a pretty high elevation."

The National Weather Service is warning that even brief bursts of moderate rain, just 10 or 15 minutes long, could cause flash flooding and debris flows in the area.

Arizona's monsoon season is just around the corner. It typically starts around the end of June and peaks in late July, Waters said.

"You get very heavy rains falling not across a widespread area, but isolated pockets, and typically the rain is more pronounced over the mountains," Waters said, "so that's setting you up for possible disaster there."