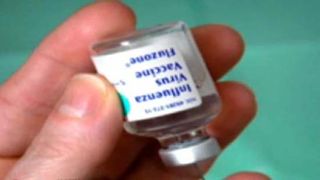 Scientists say they are one step closer to establishing a way to double the U.S. supply of flu vaccine, which could ward off the possibility of shortages.

According to a new study based on a method already in use in Europe, only half the current amount of antigen -- the vaccine component that generates our immune response – would be needed to produce the vaccines for avian and swine flu, and those vaccines' effectiveness would increase. The antigen is often the limiting factor in vaccine production.

The scientists reduced the needed amount of antigen by adding a type of adjuvant to the vaccine. Adjuvants are compounds that increase the human immune response.

The use of an adjuvant, however, stands to unleash the same kind of criticism from anti-vaccine groups as the addition of a preservative, thimerosal, did, despite scientific evidence showing the vaccine's safety.

Some global health experts have criticized the slow adoption of adjuvants in U.S. vaccines, saying it limits the supply available to developing nations. At the same time, U.S. officials have noted the current vaccine is effective, and are reluctant to fan public resistance to vaccine use, as it may prevent some from getting any vaccine at all.

"In general, most of us think adjuvanted vaccines add effectiveness and the capacity to more rapidly deliver vaccines," said William Schaffner, chairman of preventive medicine at Vanderbilt University School of Medicine. Schaffner, who was not involved with the new study, has been on several vaccine advisory panels, including the Department of Health and Human Services’ National Vaccine Advisory Committee.

The new study was conducted by scientists at the Food and Drug Administration and the pharmaceutical company Novartis, and its findings appear today (June 1) in the journal Science Translational Medicine.

Made from shark liver oil

The adjuvant in the study, known as MF59, contains squalene, a purified form of shark liver oil. Squalene is also naturally produced by the human liver.

The researchers said including MF59 in the vaccine produced a stronger immune response to the flu in children from ages 1 to 8 than the vaccine currently in use, which contains no adjuvant.

"Thus, MF59 quantitatively and qualitatively enhances" the body's response to the vaccine, the study's authors wrote.

Vaccines containing squalene have been used in Europe since 1997, but they have not been licensed for use in the United States.

There have been discussions over using such vaccines here, Schaffner said, particularly given their potential to help the elderly, a group especially in need of the annual influenza immunization. "They might indeed evoke a better immune response from people who are older and whose immune response doesn't work as well."

It’s unclear how soon an adjuvanted vaccine could be available. The FDA still needs to review the data and inspect the production facilities in Europe, Schaffner said. Because of the timing, adjuvanted vaccines are unlikely to be in the United States for the upcoming flu season, but could arrive in the fall of 2012, he said.

An added dose of controversy

There has been some discussion in the past about utilizing adjuvants, most notably when the swine flu epidemic of 2009 prompted concerns about the availability of vaccine. However, public health officials decided against it because the regular vaccine seemed to be effective, and they felt the adjuvant had not yet been tested adequately in children.

Schaffner said that if Novartis began using adjuvanted vaccine, it would help increase the vaccine supply and allow the company to have a larger share of the market.

However, he said, opposition from the anti-vaccine movement would be likely. Schaffner said he "would predict very securely" that groups that protested the addition of thimerosal to vaccines -- despite a lack of evidence of side effects from that preservative -- will also protest adjuvants.

As a result, he said, the utility of an enhanced vaccine will have to be weighed against the possibility that some people will forgo a flu shot altogether.

"They're going to have to decide whether the juice is worth the squeeze," said Schaffner. "You would have once again that sort of noise in the background to deal with, and the companies take that noise very much into consideration as they make their decisions."