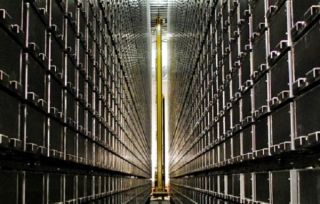 Five-story robots patrol an underground chamber to retrieve books beneath the Mansueto Library at the University of Chicago. It's a sight that would impress most people, but U.S. librarians and academics have their eyes set on a still more futuristic concept. They want to build the Digital Public Library of America.

The library founders have wisely crowdsourced the concept to anyone who has ideas about what a digital library should look like. Such a challenge rivals an architectural design contest for the next huge skyscraper, according to John Palfrey, co-director of the Berkman Center for Internet & Society at the Harvard Law School.

But make no mistake; the Digital Public Library of America does not spell the end for your local library. If anything, it would do the opposite.

"I hope that a thriving Digital Public Library of America can be a complement to a very bright future for libraries of all sorts by freeing them up to do more," Palfrey said. "If you talk to any bright-eyed librarian in any setting, they'll talk about all the things they're eager to do and can't get to because of budgetary constraints."

A future digital library could be as simple as agreeing about creating standards for sharing existing digital resources. Or it could represent its own full-blown Internet portal that holds all sorts of content ranging from journal articles to comic books, from the latest chart-topping songs to old Hollywood movies.

The actual concept would likely fall between those two visions, Palfrey said. But whatever the case, he emphasized the need for such a library to make use of all the other online archives and digitization projects that have already uploaded material onto the Internet.

"One of the important challenges here is that we don't want to recreate the great work of PublicResource.Org. digitization projects, and the efforts of many big libraries," Palfrey told InnovationNewsDaily. "We want to tap into, coordinate and spur such efforts, not work at cross-purposes."

A digital library should also tie into existing resources such as Google search or the open-source Wikipedia, Palfrey said. That only makes sense given how so many "netizens" already make use of such resources.

The Digital Public Library of America also needs to consider how to become available to as many people as possible. That could mean enabling multiple language versions, as well as making sure that visually impaired people can still surf the library's contents.

Different portals for the library might also suit people with different digital connection speeds or types of access. During a recent workshop, planners observed that more people will access the Internet through mobile devices rather than a traditional computer by 2013 or 2014.

Users might even enter the digital library through different interfaces depending on whether they're looking for the latest murder mystery thriller, sci-fi movies or old U.S. court decisions. In all cases, the interfaces should be "beautiful and intuitive and helpful," Palfrey said.

The expense for the Digital Public Library of America might end up around $5 million-10 million a year, based on operating costs for the similar Europeana project. But that cost could rise by up to ten times if the library has to digitize a lot of text, audio or video content that doesn't already exist online.

Palfrey and the library steering committee must also consider how to secure copyright permissions for lending digital materials not in the public domain, so that future library users can enjoy some of the latest best-selling books or Hollywood blockbusters.

Still, the effort could pay off big by empowering people with access to knowledge that they might harness in unexpected ways.

"The Digital Library of America can be a generative platform for people to do innovative things that we can't foresee now," Palfrey said. "That's the big win for me, allowing things that we couldn't possibly imagine at the outset."

The future library may even end up connecting to digital libraries in other countries such as the Netherlands, Norway and South Korea.

Anyone can submit their interest in a proposal for The Digital Public Library of America's Beta Sprint by June 15, 2011. Finished proposals are due by Sept. 1, 2011.