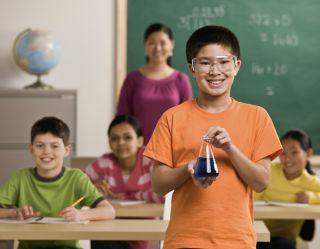 Immigrant parents' focus on science and math pays off for their kids, a new report finds.
(Image: © © Jonathan Ross | Dreamstime.com)

Immigration is a boon to American science and math, a new report asserts, noting that 70 percent of the finalists in a recent prestigious science competition are the children of immigrants.

The report by the National Foundation for American Policy, a nonprofit research group in Arlington, Va., states that many immigrant parents emphasize hard science and math education for their children, viewing those fields as paths to success.

Statistics supporting that belief: According to a recent Georgetown University study on the value of undergraduate majors, the lifetime median annual income for someone with a bachelor's degree in engineering is $75,000, compared with $29,000 for a counseling or psychology major. [Infographic: Highest-paying College Majors]

That study found that the highest earners are petroleum engineers, with median annual earnings of $120,000.

Only 12 percent of Americans are foreign-born, the NFAP report says. Even so, children of immigrants took 70 percent of the finalist slots in the 2011 Intel Science Talent Search Competition, an original-research competition for high school seniors.

Of the 40 finalists, 28 had parents born in other countries: 16 from China, 10 from India, one from South Korea and one from Iran.

"In proportion to their presence in the U.S. population, one would expect only one child of an Indian (or Chinese) immigrant parent every two and a half years to be an Intel Science Search finalist, not 10 in a year," wrote the report's author, NFAP director Stuart Anderson.

Finalists interviewed for the report attributed their interest in research to their parents' attitudes.

"Our parents brought us up with love of science as a value," David Kenneth Tang-Quan, whose parents emigrated from China to California, told Anderson, according to the report.

Still, children of immigrants face barriers outside of the education system. According to the Georgetown report, racial disparities in pay persist even within science fields. Whites with an undergraduate major in engineering out-earn Asians with the same degree by about $8,000 a year. African-American and Hispanic engineering graduates fare worse, making about $60,000 and $56,000 per year, respectively, compared with whites' $80,000.

Asians out-earn whites in the fields of health, law and public policy; psychology and social work; and biology and life sciences.

The fact that children of immigrants excel in science and math should be taken into account when making immigration policy, Anderson wrote: "The results should serve as a warning against new restrictions on legal immigration, both family and employment-based immigration, since such restrictions are likely to prevent many of the next generation of outstanding scientists and researcher from emerging in America."