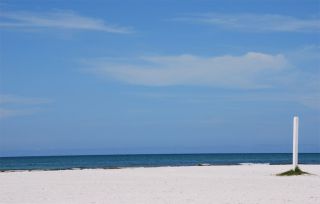 Siesta Beach is located on Siesta Key in Sarasota, Fla., home to the whitest sand in the world. The beach topped the 2011 list for best beaches, which was announced May 27. This is the 21st year of the Best Beaches list, put together by Stephen Leatherman, director of Florida International University's Laboratory for Coastal Research in Miami, who is also called Dr. Beach.
(Image: © © Jacek76 | Dreamstime.com)

Moving up a spot from last year, Florida's Siesta Beach — known for the whitest sand in the world and its clean, blue water — topped the 2011 list for best beaches, which was announced today (May 27).

This is the 21st year of the Best Beaches list, put together by Stephen Leatherman, director of Florida International University's Laboratory for Coastal Research in Miami, who is also called Dr. Beach.

In addition to its sparkling sand and beautiful water, Siesta Beach, Leatherman said, boasts of the perfect waves, not for surfers, but for kids and families to play in. Rather than feet, the waves are measured in inches and the beach gradually slopes into the Gulf waters, making it a very safe area for children. [See Photos of the Top Beaches]

Last year's top beach, Cooper's Beach in Southampton, N.Y., didn't even get a spot in the top 10 this year, while others, such as Coronado (No. 3 last year) and Cape Hatteras (No. 4 spot in 2010), are becoming mainstays. [See last year's list]

More about the winner, if you're looking for a place to spend Memorial Day weekend: The beach park is complete with showers and bathrooms, snack bars, grills, picnic tables, shade trees and a large parking area, which Leatherman says fills up on summer weekends.

Being smokeless earned Siesta extra points for cleanliness and environmental management. "My favorite time to visit is after Labor Day when things have calmed down, and the water is still warm enough for swimming until November," Leatherman said in a statement.

As with Siesta, all 10 beaches were chosen from Leatherman's survey of 650 public beaches along the Atlantic, Gulf and Pacific coasts. He uses 50 criteria for ranking beach quality, including sand softness, frequency of rip currents, size of waves, presence of shorebirds, water color, the presence of oil and tar balls, whether it's overcrowded, public safety, maintenance of grounds and other factors.