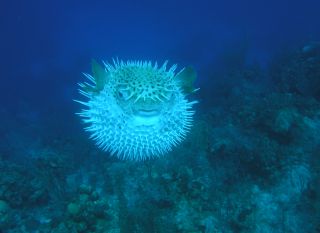 Aliens have invaded the Mediterranean by the hundreds — alien species, that is.

In recent decades, more than 900 new alien marine species, including the poisonous puffer fish, have been encountered in the coastal environments of the eastern Mediterranean Sea,according to a new study. This alien invasion has wrought changes on the food web of the sea, the four-year study conducted at the University of Gothenburg in Sweden found. The study warns, though, that a limited understanding of the ecosystems at risk makes dealing with the invaders more difficult. "The Mediterranean is the world's most invaded sea, but our understanding of how alien species affect ecosystems is inhibited by a lack of basic knowledge of the animal and plant communities on the coast," said study team member Stefan Kalogirou. "Once species have become established in the Mediterranean it is almost impossible to eradicate them." The completion of the Suez Canal in 1869 opened a pathway for alien species to invade the eastern Mediterranean. In recent years, regular reports of alien species from several of the coastal environments of the eastern Mediterranean have caused concern over what will happen to indigenous species and ecosystems. Over a period of four years, Kalogirou, in cooperation with the Hellenic Centre for Marine Research, has studied the structure and function of fish communities in sea grass meadows and on sandy bottoms in two important coastal environments on the island of Rhodes in southeastern Greece. This has provided important insights into the possible ecological consequences of alien species in the food chain. "The results show a clear ecological impact when alien species either become dominant, like puffer fish, or are piscivores [fish-eating species], like barracuda and cornetfish," Kalogirou said in a statement. "It is evident that the food chain is being restructured, but the lack of previous studies limited our conclusions." The poisonous puffer fish is one of the alien species that have recently been introduced. The puffer fish toxin, tetrodotoxin, causes muscle paralysis, which can lead to respiratory arrest. In worst cases the outcome can be fatal. In the coastal environments that Kalogirou has studied, the puffer fish has become a dominant species, which has led to both ecological and social effects. The study was Kalogirou's doctoral thesis and was successfully defended.