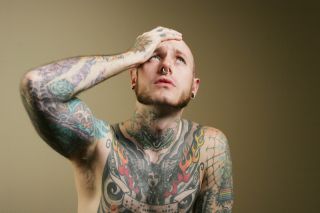 The day after: Tattoo regret is common and is creating a large demand for tattoo-removal technologies.
(Image: © Maxfx | Dreamstime.com)

More young people are flocking to tattoo parlors to get inked under the impression that it no longer has to be forever. Some experts believe that the demand for removal technology in the future may grow exponentially, creating a greater need for qualified dermatologists. According to the American Academy of Dermatology, tattoo regrets are common — in fact, 17 percent of those who get tattoos consider getting them removed.

Now with the availability of tattoo laser removal and the introduction of new ink that can be more easily removed, tattoos are starting to mark a phase in someone's life rather than becoming a permanently inked statement.

"It's likely that more medical professionals will be trained in laser removal in the upcoming years, as tattoo removal is expected to rise," said Allen Falkner, owner of Fade Fast Laser Tattoo Removal. "Tattooing is still a growing industry and tattoo removal will most likely see a similar growth pattern."

"The more people [who] get them done, the more there will be a need for removal," added Falkner, who has been performing laser tattoo removal for four years and previously operated a tattoo studio for 15 years.

Dermatologist Brooke Jackson, founder of the Skin Wellness Center of Chicago and an assistant professor at Northwestern University said she's noticed an increased interest in tattoo removal over the years.

"I can't tell you how many people I've worked on who have tattoos who wish they had never gotten one," Jackson said, adding that interest in the technology is on the rise. "They get one as teens or in their early 20s and then need to interview to get a job and wonder why they aren't getting hired." [10 Easy Paths to Self Destruction]

Laser removal, which is most common and widely used way to remove a tattoo, involves a beam of parallel light that delivers energy into the skin. The tattoo ink absorbs this light, causing the ink to fracture into smaller particles that are then carried off by the body's lymphatic system.

"Most lasers dispense their energy over a time of about one-thousandth of a second; however, a tattoo removal laser uses a smaller amount of energy over a time period that is about 1,000 times more rapid," said Gregory Laurence, a laser and cosmetic surgeon at Memphis, Tenn.-based Germantown Aesthetics. "This causes a vibration effect rather than a heat effect."

"The colored pigment is literally shaken up and broken up, allowing the body to come and remove the freed-up pigment," Laurence said.

David Bank, a dermatologist and the president of the New York State Society for Dermatology and Dermatologic Surgery, said a tattoo's color, depth and the chemical composition of the ink all affect how it responds to laser light.

For example, black, red, dark orange and dark blue tattoos will usually respond relatively quickly to treatment with laser. However, green, purple, brown, light orange and light blue colors may respond more slowly. But overall, most tattoos can be successfully removed, given a sufficient number of treatments — most typically, between six and eight sessions and at intervals of six to eight weeks. [Are 'I Love Mom' Tattoos Still Popular?]

Since the laser light selectively targets the undesired ink, other tissues remain largely unaffected. However, some report minimal discomfort, comparing it to the sensation of being snapped with a rubber band against the skin.

"In some cases, patients seek removal right away, even within the first week of tattoo placement," said Laurence. "But actually the best time to start removal is four months or longer after the placement of the tattoo."

There are some downsides associated with any procedure involving body modification, Falkner said.

"In the hands of an untrained individual, a laser can cause scars, burns, scars and other forms of damage to the skin and underlying tissue," Falkner said. "However, if the machines are operated by qualified and trained technicians working under the supervision of a medical director, the procedure is actually quite safe."

The cost of the removal of the tattoo is also typically 10 to 20 times as expensive as the artwork.

Some people who are uncertain about getting a tattoo are turning to a type of permanent ink that is engineered so it can be removed more easily with minimal lasering. (Infinitink, from the company Freedom2, is offered at various nationwide tattoo parlors.)

According to Freedom2, 25 percent of all people over the age of 18 in the United States already have a tattoo and another 25 percent are thinking about getting one but haven’t.

"An Infinitink tattoo is just as permanent as any other, but it can be removed with minimal lasering," the company noted on its website. "It's there forever, unless you change your mind."

The Infinitink tattoo is applied by inserting ink through the skin just like normal tattooing, but according to the site, scientists have created an alternative to help the dissolution of the pigment when passed over with a laser.

However, since it's still a new technique that needs more testing, some doctors are still undecided about the alternative.

"Time will really tell if it is beneficial," Jackson said.

Samantha Murphy is a senior writer for TechNewsDaily, a sister site to LiveScience.