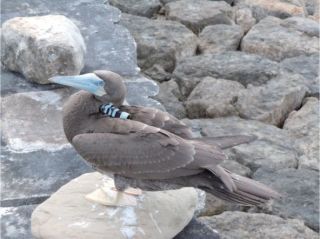 Birds of a different feather do fly together, with scientists now discovering that young seabirds regularly follow different species to learn from them, according to the first study to strap video recorders on flying seabirds.

A key to understanding how juvenile animals develop involves watching them interact socially and potentially learn from the experience of others, as opposed to by trial and error. Birds that fly out of sight of researchers have understandably proven difficult to monitor, but now technology has advanced enough to make this possibility a reality.

Scientists focused on the brown booby (Sula leucogaster), a tropical seabird found in both the Atlantic and Pacific Oceans. The researchers hand-raised three chicks on Nakanokamishima and Iriomote Islands in Japan, feeding them fish for 100 days, until the birds fledged or became mature enough to fly. [Watch video from brown-booby flights]

Using tape and glue, the scientists next attached miniature video recorders onto the backs of these fledglings, each weighing about 27 grams, or less than one-fortieth the weight of the 3.3-pound (1.5-kilogram) birds.

"This is the first study to deploy video recorders on flying seabirds," researcher Ken Yoda, a behavioral ecologist at Nagoya University in Japan, told LiveScience. (Past research did place cameras on penguins.)

The young birds then flew to the sea during the day and returned to the nest and begged for food from the scientists who raised them. The three months or so before these fledglings finally left the nest gave the researchers daily opportunities to download the two hours of bird's-eye point-of-view video the cameras recorded.

"I've been studying seabirds for a long time, but I could not have imagined 10 years ago that we would be able to see from a seabird's viewpoint in the air," Yoda said.

The researchers found that young seabirds regularly followed other birds, presumably to learn how to improve their foraging or flying skills. Surprisingly, the scientists found that young brown boobies often followed other species, such as brown noddies (Anous stolidus) and streaked shearwaters (Calonectris leucomelas), with approximately 40 percent of the plunging dives the birds carried out to capture fish taking place close to other species. [World's Cutest Baby Wild Animals]

Yoda got the idea for this work from his 3-year-old daughter, who wanted to follow a stranger in the park. "This gave me the idea that young animals would have a tendency to follow others," Yoda recalled.

As to how other birds feel about such young competition following them, "we do not have any data, but other species may want to get them out," Yoda said. "However, this booby is the largest species around this area, so it may be hard to do that."

Such bird's-eye-view video research could help investigate many other group behaviors of birds, Yoda said. Potentially, such video could even reveal unknown species, he added.

The scientists detailed their findings online May 4 in the journal PLoS ONE.