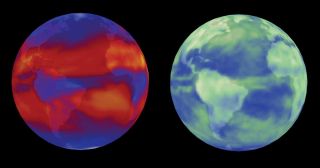 Left: April 2001; Heat given off by the Earth's surface and atmosphere and pumped out into space. Right: April 2001; Sunlight reflected back out to space by the oceans, land, clouds and aerosols. For scientists to properly understand climate change, they have to determine what drives changes within the Earth's radiation balance.
(Image: © Data courtesy of the Atmospheric Sciences Data Center and the CERES Science Team at NASA Langley Research Center. Images courtesy of Tom Bridgman, NASA Goddard Space Flight Center Scientific Visualization Studio.)

The news that a 2008 study widely cited by global warming deniers has been retracted likely won't end the contentious debate.

The paper, known widely as the Wegman report and published in the journal Computational Statistics and Data Analysis, was retracted because of serious flaws including instances of repeating discredited claims, alleged plagiarism, and a lack of peer-review prior to publication, the journal indicated.

Problems with the Wegman study had been known since last year, but it wasn't until this week that journal editor Stanley P. Azan retracted it.

The Wegman report was the product of research commissioned by two U.S. Representatives, Joe Barton and Ed Whitfield, who asked a panel of statisticians led by Prof. Edward Wegman of George Mason University, to assess the validity of the evidence for man-made global warming, which had been called a "hoax" by Republican Senator Jim Inhofe. The report concluded that the evidence for human-caused climate change was flawed, and led many to question the validity of global warming.

In fact, many interpreted the report as evidence that climate scientists colluded to deceive the public and censor any dissenting views.

The controversy over global warming has always been contentious and tinged with accusations of not only scientific incompetence, but also outright fraud and conspiracy. The Wegman report was instrumental in spawning those suspicions among the public and global-warming deniers.

The study's retraction follows the 2009 "Climategate" emails that were hacked from computers at East Anglia University, a leading climate research center. The emails — widely touted at the time of their release as "smoking gun" documents that proved climate scientists had faked data —turned out to be nothing of the sort.

Conspiracy theorists combed through the data looking for fraudulent research and faked studies but found little. Several independent investigations found instances of sloppy recordkeeping and unprofessional conduct, but no evidence of any fraud or misrepresentation of climate data. Critics have suggested that the investigations clearing the scientists were themselves part of a larger cover-up to keep the truth from the public.

A similar theme can be found in the anti-vaccination conspiracies. When Dr. Andrew Wakefield's research linking childhood vaccinations to autism was questioned (and his journal article later retracted) his supporters refused to accept that Wakefield had been wrong all along, and instead claimed that it was all part of a campaign to discredit him. [Vaccine & Autism Timeline: How the Truth Unfolded]

That's a hallmark of conspiracy theories: they essentially cannot be disproven because any evidence against them is itself seen as part of the conspiracy. It's likely that those who believe global warming is a hoax will see the Wegman study retraction as politically motivated.

Benjamin Radford is deputy editor of Skeptical Inquirer science magazine and author of Media Mythmakers: How Journalists, Activists, and Advertisers Mislead Us. His Web site is www.RadfordBooks.com.