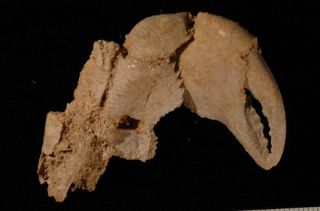 Land crabs as large as an adult's hand once migrated between the Pacific Ocean and the forests high on the Hawaiian islands. Their disappearance may be the first documented extinction of a crab during humans' presence on the planet, according to researchers.

Land crabs spend their adult lives in forests, and make risky trips to the oceans to release their larvae, which grow into crabs that return to land. The most famous land crabs occupy Christmas Island, where they make an arduous journey to the ocean every year.

Of the islands of the tropical Pacific, only Hawaii's seem to lack these crabs. Now, fossils have revealed that the crabs did indeed live there, but like many other species they seem to have fallen victim to changes wrought by humans.

Fossils left by the crabs predate the arrival of the Hawaiian islands' first settlers, Polynesians who made the long trip by sea around 1,000 to 1,500 years ago. After the time humans arrived, the crab fossils rapidly disappeared.

The Hawaiian crabs, called Geograpsus severnsi, were distinct from other land crabs in this part of the world; they were large, lived farther inland and at higher elevations, and had a diet that could include insects and young birds, according to lead researcher Gustav Paulay, a marine malacology curator at the Florida Museum of Natural History.

The first humans to arrive on these isolated islands destroyed habitat, hunted native creatures and brought with them foreign species, such as pigs, rats and dogs, which also preyed upon native species, Paulay said. The later arrival of Europeans in 1778 only worsened things for the native species.

"The extinction crisis was huge and we have only an inkling what it involved, because the fossil record is limited to only a few kinds of organisms," he said. The other known victims include many birds, such as flightless geese.

The land crabs of Christmas Island are under threat from the invasive crazy ant.

Paulay said he was not aware of any other extinctions among crabs, even among the more vulnerable freshwater crabs, during the human era.

The study, co-authored by John Starmer, appeared online May 16 in the journal PLoS ONE.