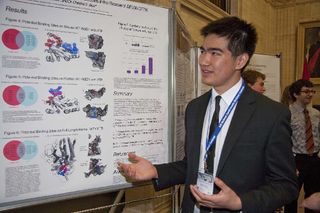 A 16-year-old from the Toronto area used a supercomputer system to find a new drug combination that shows potential in treating the genetic disorder cystic fibrosis, and won top honors for his work.

Marshall Zhang, an 11th-grade student at Richmond Hill's Bayview Secondary School, received first place Tuesday (May 10) in the 2011 Sanofi-Aventis BioTalent Challenge, a contest in which students conduct their own research projects with the help of mentors.

Cystic fibrosis is a potentially fatal condition caused by a genetic mutation, or error. It causes thick, sticky mucus to build up in the lungs and elsewhere. Cystic fibrosis occurs most among white people of northern European ancestry, in about 1 out of 3,000 live births. In the past, most people with cystic fibrosis died in their teens, according to the Mayo Clinic. It has no cure. [10 Worst Hereditary Conditions]

At his mentor's lab, Zhang used the Canadian SCINET supercomputing network to investigate how two promising new compounds acted against the defective protein responsible for the condition. Using computer simulations, he figured out how each of these drugs acted against the protein and discovered they acted on the protein in different spots, raising the possibility they could be used simultaneously without interfering with each other.

Zhang then tested his theory in living cells, and the results exceeded his expectations.

"They actually worked together in creating an effect that was greater than the sum of its parts," he told LiveScience.

Zhang is realistic about the future for his discovery; once tested in the human body, promising treatments can turn out to be toxic or ineffective, he said. But even if this combination of compounds doesn't ultimately help treat cystic fibrosis, he believes his research has laid important groundwork for other discoveries.

"I have identified certain chemical structures that are key in the corrective effects of these molecules, as well as identified two molecular targets on the protein for future therapeutics," he said.

His mentor, Dr. Christine Bear, a researcher at the Hospital for Sick Children's Research Institute in Toronto, has invited him back to her lab to continue his work, he said.

After taking Advanced Placement Biology last year, in Grade 10, Zhang decided he wanted to do what real scientists do and began contacting professors to see if he could work in their labs.

"Most of them said 'no' because I didn't have the experience I needed," he said. "I emailed the entire list of faculty in biochemistry at the University of Toronto." The last one, Dr. Bear, said yes.

Now Zhang and a trio of Montreal students who took second place for their technique for making sorbet without gelatin move on to compete against U.S. and Australian teams at the International BioGENEius Challenge in Washington, D.C., June 27.