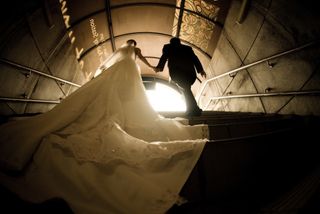 The gulf between Democrats and Republicans isn't just between red states and blue states; a new study finds that people tend to marry within their own political party — potentially widening the gulf between liberals and conservatives.

In fact, spouses are more likely to be similar politically than they are likely to have matching personalities, according to the new research, which will be published in the Journal of Politics.

Surprisingly, personality "doesn't seem as important to us as our notions of how other people should behave and the way society should be structured," said study author John Hibbing, a political scientist at the University of Nebraska, Lincoln. [Read: Rising Rancor: One Nation, Divisible By Politics]

Earlier work has shown that people tend to sort themselves into likeminded neighborhoods and workplaces, Hibbing told LiveScience. What was interesting about the new study, he said, was the finding that couples came into their relationships already matched on political beliefs. Folk wisdom often holds that mates become more and more similar as they go through life together, either because they share experiences or because they influence each other's beliefs. But in reality, people seem to be sorting themselves out by ideology, Hibbing said.

Hibbing and his colleagues used data from a study of more than 30,000 American relatives. The dataset contains information on almost 6,000 fraternal and identical twins, more than 4,000 of their spouses and the parents of 773 of the twin pairs. That gave the researchers information on the demographics and political beliefs of 5,160 couples, a rarity in political surveys. However, the data was from the mid-1980s, so it's unknown whether couples marrying today show similar patterns.

In all cases, the researchers found, birds of a feather flocked together. Personality and even physical appearance were similar between spouses, though only slightly. Much more identical were social variables, especially church attendance, education levels and politics. Of political issues, opinions on school prayer, abortion, gay rights and living together without marriage were most matched between spouses.

There are three possible reasons that people could end up matched with their political doppelganger, Hibbing said. Couples might make the choice to get together based, in part, on politics; they might simply come from similar backgrounds, conferring both similar politics and an increased likelihood that they'll meet; or they might become more alike as they stay together.

The last possibility seems unlikely, the researchers found, as a comparison of couple's beliefs over time showed that they were very similar starting at the time of marriage. Over time, the partners did not become significantly more likely to agree with one another politically.

Even within identical demographics, spouses are more like one another than they are like other members of their group. For example, Catholics seek out Catholics who share their politics, and Jews seek out other Jews with similar politics, the study found. Even strong Republicans tended to end up with strong Republicans, and moderate Democrats with moderate Democrats. The implication, Hibbing said, is that politically similar marriages arise from people's choices, not just their backgrounds.

Parents pass on their political views to their children, both through socialization and perhaps via genetics, Hibbing said, so the tendency to couple with politically similar people might, like left-wing and right-wing media sources, widen the gap between liberals and conservatives. (Political scientists agree that professional politicians are increasingly polarized these days, but not everyone accepts that the general public is more divided.)

"These tendencies to have these kinds of selections both in media exposure, who we live with, who we sleep with, if you will, may diminish the chance of getting opposing points of view," Hibbing said.