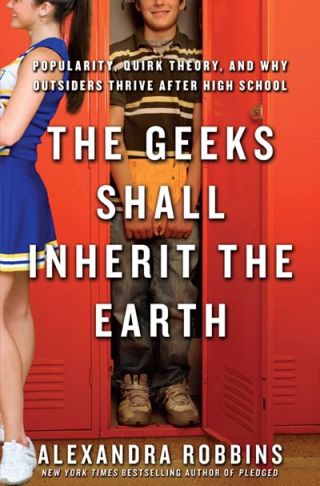 While on the speaking circuit at high schools around the country, author Alexandra Robbins noticed a disturbing trend: kids coming up to her and mentioning, almost apologetically, that they weren't in the "cool" crowd in their schools. It was clear, Robbins said, that many of these kids felt their lowly social status meant they weren't worth much.

"But repeatedly, I saw that many of the students who mentioned their supposedly low social status were students I was naturally drawn to, whether because they had an interesting personality, or refreshing ideas, or endearing quirks," Robbins told LiveScience. "So I wanted to get across the idea to these students that your social status doesn't matter. It doesn’t say anything about who you are as a person."

The result was Robbins' new book, "The Geeks Shall Inherit the Earth: Popularity, Quirk Theory and Why Outsiders Thrive After High School" (Hyperion, 2011). In the book, Robbins delves into social science research about why cliques rule schools and follows seven real kids to see how they navigate their social subcultures. Along the way, she chronicles the stories of a popular-but-miserable cheerleader, a gamer facing teasing because he's gay, and educators who model social nastiness for their students with cliquish teacher "sororities." LiveScience chatted with Robbins about the social scene in high schools today.

LiveScience: It sounds like the "unpopular" kids you talk about in your book aren't actually kids nobody likes, but that these kids just aren't in the popular cliques.

Alexandra Robbins: I call them the "cafeteria fringe," which is basically any student who doesn't sit at that popular table. What's ridiculous is that students often aspire to get to that one popular table, which supposedly represents the cool crowd at school, but it's so skewed. There are so few students who are actually included in that group.

There are two kinds of popularity. For many, many decades in order to study popularity, researchers would ask students about who they wanted to spend time with the most, and they considered those students with the most votes to be the most popular. More recently, a few psychologists changed their thinking and said, let's just ask them directly, "Who is popular?" And they were stunned because the two lists were very different.

LS: What's the difference between these two types of popularity?

It's a very Machiavellian atmosphere to try to obtain and then retain popularity in schools today. What I'm saying is, it is not worth it.

LS: It sounds like instead of parents being worried that their kid isn't popular, they should be worried if he or she is.

LS: How much pressure do kids feel to be in this group?

AR: I think they feel increasing pressure to conform to a very narrow ideal in school, not just academically, but also socially. I think there is way too much pressure on students to fit into this very rigid, confined mold of the "ideal student," when instead we should be nurturing the outsiders who reject that image, or who can't fit into that image. That's how I get into quirk theory. [Read: Parents Choosing More Unusual Baby Names Now]

LS: What is quirk theory?

AR: Many of the differences that lead people to exclude students in school are the same characteristics or skills that other people will value, admire or respect about those students in adulthood and outside of the school atmosphere.

LS: So is this like how the unpopular kid grows up to become Bill Gates?

AR: Bill Gates is probably a good example of quirk theory, but this book isn't just about geeks. I'm saying this applies to loners, floaters, skaters, goths, punks, band geeks. I'm saying this is across the board, that students who don't conform to the popular crowd image are going to be better off after school.

LS: If the popular cliques can be so cruel to each other, what drives kids to want to be a part of these groups?

AR: I think celebrity culture plays a role and the way you see people outright say on reality TV, "I'm not here to be anyone's friend." Many students are now viewing school social life as a race up the ladder. It has a lot to do with prestige, with the emphasis today on being known and being famous.

Whitney, the cheerleader I followed, one time she was recapping a party for me and said, "Yeah, I felt like a mini-celebrity."

LS: Is there something adults can do to discourage this mindset?

AR: First of all, parents should never emphasize popularity. They should never push their child to make more friends if the child is happy with his or her current social life. Parents should also try very hard to resist getting caught up in the whirlwind of social comparisons among parents. I tell parents that your child's social status does not reflect your own and definitely does not reflect your parenting skills. [Read: How to Avoid Raising a Bully]

Also parents should encourage their children to express unique views and styles, even if their perspectives differ from your own. It is so important for students to see that differences are valued and shouldn't damage relationships.

Another thing parents can do is encourage students to pursue nonschool activities. That's because once you're stuck with a label in a school environment, it can be hard to rip it off. I think all kids could benefit from getting involved with other students who don't know their social label.

LS: What about the school environment?

AR: Schools don't realize that they are helping to order the school social hierarchy. There are three components to popularity: The student has to be visible, recognizable and influential. Well, who is the school making visible, popular and influential? At pep rallies, it's always the athletes who are being recognized.

Don't offer group discounts for events like plays, sports or concerts, don't give discounts to couples or kids who go in groups. That's not fair to kids who would go alone. Schools can also vary cafeteria table seating options. Instead of having a set number of chairs at each table they can have tables of various sizes so that various sized groups can mingle comfortably. They can set out loose chairs to encourage floaters to go from one group to another. The worst part of any school day socially is walking into that cafeteria and trying to figure out where to belong.

LS: Is the goal to do away with popularity or to move different kids into the popular group?

AR: I think the goal, ultimately, is to have an environment in which every student feels comfortable. Hierarchies are going to fall into place naturally. It's just what happens everywhere. But nobody should feel comfortable or devalued or as if they're less of a person just because they're not at the popular table.