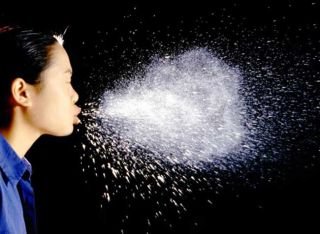 The real deal: This is what a sneeze looks like. And now you know why health officials say two of the best ways to prevent flu spread are to sneeze into your arm and wash your hand a lot, because other people don't sneeze into their arms.
(Image: © Andrew Davidhazy/RIT)

If you thought flu season seemed particularly bad this year, you'd be right. Monthly reports of the flu have exceeded those of last season for the last five months, from December to April, according to a new report.

For example, in February, typically the peak of flu season, 3.3 percent of Americans reported having the flu this year, up from 2.2 percent in the same month last year.

However, reports from the start of flu season, in September, October and November, were lower this flu season compared with last year's.

To track the prevalence of the flu, the poll, known as the Gallup-Healthways Well-Being Index, asked 1,000 randomly selected U.S. adults each day whether they had had the flu the previous day.

Many factors have likely played a role in the higher levels of flu in the latter part of this season. While the ease and availability of combined H1N1/influenza vaccinations were greater this year, other more practical efforts to curtail the spread of the flu, such as public health campaigns promoting good hygiene practices, may have declined as a result of a reduced sense of urgency. Without such large-scale prevention campaigns, Americans may have become more complacent about protecting themselves against the flu, Gallup says.

Americans living in Alaska, West Virginia and Vermont were the most likely states to report daily colds and flu this season, with about 13 percent of residents in each state reporting being sick with either on any given day. In contrast, 7.4 percent of residents in Nevada reported either of these conditions on average each day, the lowest level for any state.

Gallup says some Americans may have a misunderstanding of what actually constitutes "the flu" as opposed to another illness with similar symptoms, such as a cold, and such errors could affect the results. The poll has a margin of error of 1 to 2 percentage points in most states, they say.

Pass it on:More Americans reported having the flu in December, January, February, March and April this year than did in the same months the following year.