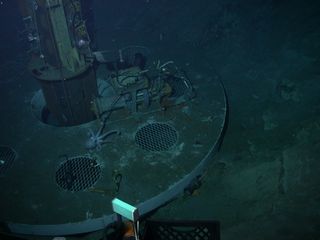 The top of a CORK observation system that was used to collect microbes living deep beneath the seafloor.
(Image: © Keir Becker and and Woods Hole Oceanographic Institution)

Life is known to exist in some unimaginably harsh places, from frigid polar ice to scorching hydrothermal vents. Now scientists have found a smorgasbord of microbes thriving in another unlikely realm: the vast, hot, rocky environment within the Earth's crust beneath the ocean floor.

Some inhabitants of this realm have been collected by scientists using iron-containing rocks as bait. The rocks were suspended within special observatory systems deep below the Pacific Ocean floor.

"The microbes we were finding on these rocks were actually very unique. There are very few places on Earth they are found, and at this point we don't have a very good idea of what they can do," said Beth Orcutt, who led the project while at the University of Southern California. She is now a postdoctoral researcher in Denmark at the Center for Geomicrobiology. [The Harshest Environments on Earth]

A study she and others published recently focused on the results from one observatory located in the crust below the northeast Pacific Ocean, on the eastern flank of the Juan de Fuca Ridge. Genetic analysis revealed that the microbes populating the rock samples there were "strikingly different" from microbial communities in related environments, including the surrounding seafloor and in hydrothermal vents, which spew hot water from beneath the crust into the ocean. [The Most Extreme Creatures]

Many of the critters belong to the broad group of bacteria called Firmicutes, the genes suggested. But having an idea of where these organisms fit in their family tree is not the same as knowing what they do, Orcutt told LiveScience.

Scientists particularly want to discover how much the microbes are involved in the vital exchange of chemicals that continuously takes place between the below-ocean crust and the water.

The microbes live in an enormous reservoir of hot water beneath the ocean floors. Water from this aquifer escapes up into the ocean through hydrothermal vents and other openings, though it's not entirely clear how ocean water recharges the aquifer. This process carries heat emanating from the Earth's hot interior into the ocean, and it also creates the exchange of chemicals between the crust and the ocean.

Some of these chemicals are crucial for life. For instance, escaping water can carry iron and phosphorus, both of which are needed by tiny plankton at the base of the ocean food chains, Orcutt said.

"The exchange between water and rocks is not entirely an abiotic reaction. We think bacteria actually influence that process," she said. "These microbes may be mobilizing iron out of the rocks; then that can come into the ocean above the seafloor. There is a whole range of reactions that could be occurring."

The sample rocks used as bait contained iron in order to replicate the microbes' habitat, she said, noting that the majority of the Earth’s below-ocean crust consists of iron-containing rock.

Observing life 919 feet (280 meters) below the seafloor, as the researchers did, is tricky because the process of boring into the crust disturbs the microbial communities that inhabit it. So, in order to get an accurate picture of what lives within the crust, the scientists turned to a special type of observatory system called a CORK (for Circulation Obviation Retrofit Kit).

A CORK is created from a borehole, like that drilled to find oil. Instrumentation and the rock samples are suspended inside and seals keep ocean water above from mixing with the warmer water below, so data can be collected on the natural environment at depth. CORKs were initially created to study the under-ocean aquifers, according to one of the designers, Keir Becker, a study researcher and professor at the University of Miami. Now about 20 are located under oceans around the world where they are involved in various research projects, Becker told LiveScience.

After the rock samples were lowered into the boreholes, scientists waited four years before retrieving them. This allowed conditions farther down to return to their natural state for observation.

When analyzed, the rock samples revealed that bacteria that can consume iron in the presence of oxygen arrived shortly after installation. However, as the conditions within the observatory returned to their natural state -- warming up and losing oxygen -- these bacteria could no longer survive, and they were replaced by Firmicutes and other inhabitants.

The study appears in the April issue of The ISME Journal.