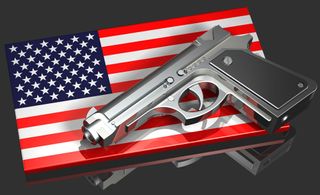 The Second Amendment to the U.S. Constitution reads: A well regulated militia being necessary to the security of a free State, the right of the People to keep and bear arms shall not be infringed.
(Image: © Dreamstime)

Florida is set to become the first state to pass a law that would limit doctors' ability to council parents about gun safety in the home. Pediatricians decry the law as wrongheaded, and they're backed by statistics that suggest the law will kill kids.

Last week, the state legislature approved a bill that would make it legal to impose punishment on doctors who ask about guns kept in the home. The bill awaits approval from Florida Gov. Rick Scott, who is known to support gun rights and will likely sign the bill, said Dr. Louis St. Petery, a pediatrician in Tallahassee, Fla., and executive vice president of the Florida Pediatric Society.

"We feel that physicians will be reluctant to ask about guns in the home as a result of this legislation. As a result we expect that, unfortunately, there will be an increase in injury and death of children and adolescents due to improperly stored guns," St. Petery said. [See Top 10 Leading Causes of Death]

Similar legislation has been proposed in Virginia, West Virginia, Alabama and North Carolina.

Supporters of the Florida bill, including the National Rifle Association (NRA), say they want to stop doctors from invading their privacy, and are concerned the information may be used against them by insurance companies.

Pediatricians have some stark numbers to back up their concerns:

A gun in the home is 43 times more likely to kill someone known to the family than it is to kill someone in self-defense, according to the American Academy of Pediatrics (AAP). And many victims of accidental gun injuries and death are under age 25, research has shown. Further, states with the most guns at home have suicide rates double rates of states with the fewest guns, and those suicides are often children.

Pediatricians argue it's vital to ask about guns in the home so they can advise parents about risks and make sure the guns are stored properly, all in order to prevent injury and death in children.

"For pediatricians, prevention is the name of the game," St. Petery said.

"We're not out there to rid the state of guns," said St. Petery, who also owns a gun at home and raised three children. "We're out to be sure if parents have guns that they are aware," of how to safely store it, he said. More than one-third of American homes have at least one gun at home, but a 2007 study found 70 percent of guns are not stored safely.

If the law passes, parents could report doctors who inquire about gun ownership to the Florida State Medical Board. The board can then impose disciplinary action, which may go as far as taking away the doctor's license to practice medicine. As a compromise, doctors can ask about gun ownership if they think the child is in imminent danger. But pediatricians say this wording is subject to interpretation, and they object to being penalized for doing something they believe to be in the best interest of the child.

"I would think there should be a law that says if you don’t [council parents about gun safety], that should be malpractice," said David Hemenway, a professor of health policy at the Harvard School of Public Health who studies injury prevention.

Studies overwhelmingly show that, for the average family, it is better for the health of the children if a gun is not kept in the home, Hemenway said.

Children and young adults are particularly at risk for accidental injury and death from guns. From 2003 to 2007, 680 Americans were killed accidentally per year with firearms, according to data from the National Violent Death Reporting System. Two-thirds of those deaths occurred in the home, and about half of the victims were younger than 25 years old, Hemenway said.

Children in the United States are 11 times more likely to die accidentally from a gun injury compared with children in other developed countries, he said.

Some children are too immature to understand the risks of guns, and the fact that parents may prohibit their children from playing with guns will make the kids only want to play with them more, St. Petery said.

Children over age 14 are at greater risk for suicide if they have access to guns, studies have shown. A 2007 study in the journal Trauma revealed a stark statistic: In the 15 states with the highest levels of household gun ownership, twice as many people committed suicide compared with the six states with the lowest levels of gun ownership. And guns are very effective. About 85 percent of attempts to commit suicide with a gun are fatal, according to the Harvard Injury Control Research Center. Fatality rates using other methods, such as cutting or overdosing, are much lower -- less than 5 percent.

Pediatricians are often the first health professionals to identify kids and adolescents with mental issues who are vulnerable to suicide, the AAP says. In these situations, it becomes critical for pediatricians to know whether the children have access to a gun at home, St. Petery said.

The best way to keep children safe from gun injury is not to own one, Hemenway said. This is also the position of the AAP.

But if you do own a gun in a household with children, here are steps to protect children, according to the AAP:

Parents should also find out if there are guns at the houses where their children play. If so, parents should have a conversation with the gun owners to make sure they properly store their guns, the AAP says.

Pass it on: Florida could become the first state to limit pediatricians' ability to ask parents whether they own a gun. But questions about gun ownership are necessary to prevent injury and death among children, pediatricians say.