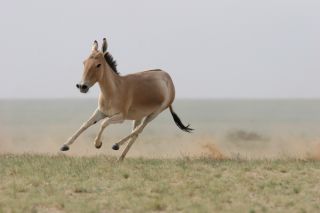 A mongolian wild ass gallops in the Gobi Desert, where unfenced habitat is in short supply.
(Image: © ITG/FIWI)

Fences and railway lines in Mongolia are cutting endangered wild asses off from their habitat, pushing the animals toward extinction, a new study finds.

Wild asses, which are related to donkeys, once ranged across Mongolia, Russia and into the Middle East. Today, they're found only in small pockets in these areas, with the largest group living in the Gobi desert of Mongolia. Despite protected areas set aside for wildlife in Mongolia, the asses are in trouble, researchers reported in February in the journal Biological Conservation.

Both manmade and natural barriers (mountains) keep the asses separated from one another and cut off from their migratory routes, a fact illustrated by one wild ass observed walking almost 40 miles (62 kilometers) alongside a railroad fence.

Researchers knew the wild asses face challenges in their Gobi desert habitat. Local ranchers see the asses as competition for their livestock, so they chase away or illegally kill the animals. The International Union for Conservation of Nature lists Asiatic wild asses as "endangered."

Using GPS data from 19 asses fitted with radio collars, along with historical range data and a genetic analysis of 80 asses, a team of European, Mongolian and Chinese scientists found that the protected areas set aside for the asses aren't enough. DNA analysis showed that two ass subpopulations are separated by the mountain ranges crisscrossing Mongolia. However, the researchers found, even though the two subpopulations can't interbreed, they still show high levels of genetic diversity, meaning they've yet to lose their evolutionary resilience to disease and environmental change.

But while the asses' genetic diversity is heartening, the other news isn't as good. Humans have restricted the wild asses' habitat and food supply, especially in the southeastern Gobi, where protected areas aren't enough to support the asses with grass and water. The asses are cut off from China by border fences, and in the east, the Ulaanbaatar-Beijing railway line cuts off more than 10,500 square miles (17,000 square km) of habitat. There are under- and overpasses across the railway fences designed for use by herders and livestock, the researchers wrote, but wild gazelles and asses seem unable to find the crossings. [Read: The Greatest Migration on Earth]

Saving the wild asses will be a matter of international cooperation, the researchers wrote. Wildlife crossing points should be built over or under railroad tracks, they said, and the border between Mongolia and China should be declared an ecological corridor with fence openings for migration. By linking protected areas, the researchers wrote, humans could provide wild asses with more than 43,000 square miles (70,000 square km) of connected habitat.