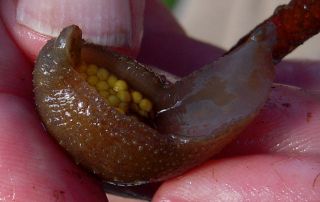 Leeches are usually thought of as blood-sucking parasites — so it's often difficult to think of them as parents. The photograph above shows a newly identified species of North American leech, Placobdella kwetlumye, with its (yellow) eggs attached to the ventral side of the parent.

The new species was identified by two graduate students, Alejandro Oceguera-Figueroa of the City University of New York and the American Museum of Natural History and Sebastian Kvist of the Museum's Richard Gilder Graduate School.

Like all leeches and their relatives, P. kwetlumye is hermaphroditic, which means that individuals are both male and female. The parent leech carries the eggs until they hatch — and then some.

"Once they hatch, they attach to the parent with their suckers, and the parent will carry them to their first blood meal," said Kvist.

The preferred "blood meal" for P. kwetlumye is typically from turtles, frogs, aquatic birds and amphibians, like salamanders. The leeches won't say no to a nice drink of human blood, however. Oceguera-Figueroa collected the leeches in Washington State by wading bare-legged into the shallow water and picking off the leeches that attached to him – a common collection method.

Kvist and Oceguera-Figueroa say that the distinguishing characteristic of the P. kwetlumye species is its single pair of compact salivary glands instead of the usual two. The researchers chose the name kwetlumye from the Native American Nlaka'pamux language, which was once spoken in the area of Washington State where the leech was discovered. Kwetlumye means bloodsucker or leech.

Kvist and Oceguera-Figueroa's research was funded by a Theodore Roosevelt Memorial Grant for the study of North American fauna through the Museum's Richard Gilder Graduate School and was recently published in American Museum Novitates, a peer-reviewed scientific journal at the Museum.