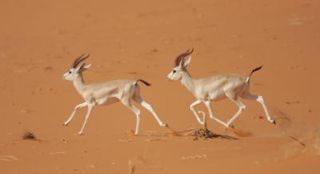 Mysterious walls built on the arid lands of the Middle East seem to have played a role in the slaughter of whole herds of wild gazelles by prehistoric tribes of herder-farmers, possibly leading to the animal's extinction in those herders' areas.

The bones of a slaughtered herd of gazelles were discovered at a site called Tell Kuran, located in the Khabur River Basin in northeastern Syria. A mound found in this area, an important source of archeological discoveries since the 1930s, was recently discovered to contain the 6,000-year-old layer of bones from about 100 gazelles.

"It was clear, once it was excavated, that it had accumulated through a single short episode, based on the fact that the bones were very concentrated and in a thin archeological layer," study researcher Guy Bar-Oz, of the University of Haifa in Israel, told LiveScience.

Bar-Oz, and co-researcher Melinda Zeder of the Smithsonian Institution, studied these bones in detail to understand how they all ended up deposited together. The bones weren't weathered as if they had amassed over time, so it's likely they were all deposited together after the slaughter of an entire herd. Based on the site's proximity to these long wall formations, the gazelles were most likely slaughtered at these formations, called desert kites.

Researchers speculate that the animals were driven into the kites — the arms of which can extend about 1,000 meters (more than 3,000 feet) long — by up to a few dozen hunters, possibly with the help of herding dogs. The two arms of such formations would funnel the animals toward a circular formation at the end, for the slaughter.

The bones found at the site were from about 100 gazelles, representing the age and gender diversity of a normal migrating herd. There were a large number of foot bones, which indicate that the gazelles were skinned and dismembered here. "Animals were moving into those kites, jumping and being injured and being slaughtered," Bar-Oz said. "If complete herds were killed, eventually it leads to their local extinction."

Scientists had suspected these prehistoric wall formations had been used in some way to herd animals for slaughter. At the time, local cultures were mainly dependent on domestic herds and agriculture, and so the gazelle meat was likely used to supplement these other food sources.

However, previous excavations of several of these kites in the area produced no evidence of large animal graves.

This kite-slaughter event would probably happen only about once a year, Bar-Oz said, during the gazelles' late-summer migration south. It was most likely a ritual slaughter, with religious connections.

"They had no refrigerators; they would have to consume this meat in a very short time," he told LiveScience. "This is why you'd connect it to some ritual get-together or feasting. At these certain times, you have a lot of meat and can share it with other people."

Earlier tribes in the area hunted a gazelle one or a few at a time. This mass slaughter of gazelles could have been the start of their demise. Gazelles in some other areas disappeared after firearms become more common for hunting in the 19th and 20th centuries.

Tell Kuran was discovered in the early 1990s, but the gazelle bones weren't described until recently.