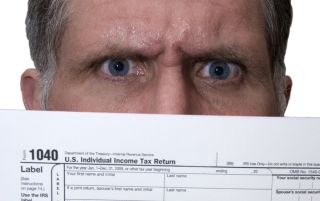 Taxes bring stress for 56 percent of Americans, a new poll finds. It's true especially for those who wait to the last minute to file.
(Image: © Dreamstime)

Federal income taxes aren't due until April 18 this year, but the extra three days aren't likely to relieve the stress that usually accompanies the annual tax day.

The months and days leading up to the filing of federal income taxes are a stressful time for more than half of Americans, according to a Zogby Interactive Survey. The poll found that 56 percent of U.S adults describe the tax-filing process as stressful, and 18 percent considered it "very" stressful.

Since many people don't like to think about their finances, Stephanie Smith, a Colorado-based psychologist, said it isn't surprising that stress levels rise this time of year.

"This time of year, you are forced to think about it," Smith said.

According to the survey, the people most likely to be stressed about filing a tax return were those who did not expect to get a refund and those who had yet to file.

Also reporting stress at higher rates than others were Republicans, conservatives, people ages 50 to 64, adults in households earning more than $100,000, self-identified investors and those who fill out their own tax forms on paper or go to an accountant. [Tax E-Filing is the New Normal]

Smith said it is important to find healthy ways to relieve the stress.

She suggests setting up a schedule to ensure you'll get your taxes finished in plenty of time, eliminating the need to rush at the last minute.

"As much as you can, make a plan as far out as you can," she said. "That way, you aren't putting in 16 hours of work the day before they are due."

While the week before taxes are due might not be the time for it, Smith said the weeks that follow are good times to evaluate your financial situation and money habits and figure out ways to change for the better. [Late? Check Out Online Tax Software]

"It can be a good time to sit down and take stock of everything," she told LiveScience, adding that it is important to make sure your priorities align with where your money is actually being spent.

Money is a taboo subject for many, but Smith said discussing your finances — and the financial difficulties you may be having — with family or friends is also a good way to help relieve stress.

"Just releasing that inner struggle can be pretty powerful," she said.

Those discussions also demonstrate that others are in the same boat.

"The positive psychological impact of realizing you are not alone is amazing," Smith said.

Most importantly, Smith said to continue doing the things that typically relieve stress, including exercise or reading.