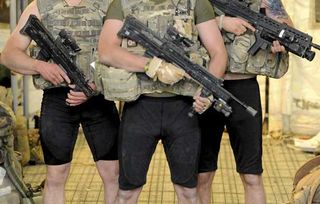 Usually, when Marines talk about protecting their groin, it involves advice about not having too much fun during shore leave. However, a recent request for 27,500 pairs of "ballistic undergarments" from the Marine Corps looks to hook up leathernecks with something a bit stronger than Trojans — bulletproof underwear.

These ultra-tough BVDs would help protect soldiers and Marines from the low-angle explosions associated with landmines and improvised explosive devices (IEDs). Since the groin contains so many arteries — and since the need for mobility leaves the groin largely unprotected by traditional body armor — injuries to that area can quickly result in life-threatening blood loss or gruesome infections.

"I MEF (Fwd) [Marine Expeditionary Force] and 10th Mountain Division forces are sustaining significant injuries to the genital, perinea, and femoral artery areas as a result of combat operations and improvised explosive devices," the Marine Corps solicitation reads. "The loss of forces due to these types of injuries has a significant impact on the unit's combat effectiveness and their ability to sustain operations. Based on analysis in theater, ballistic underwear will drastically improve casualty recovery and reduce secondary infections."

Ballistic underwear, such as the type already used by British soldiers, will not stop direct hits from bullets or shrapnel. Instead, the special skivvies mitigate the wounds by blocking out the small particles that cause additional damage in a blast. Additionally, the undies contain antibacterial treatment to reduce soldiers' risk of wounds becoming infected, allowing for faster recovery.

The underwear is made from special antimicrobial double weave silk. That material actually holds some historic parallels in Afghanistan, as the Mongol horsemen who invaded the country under Genghis Khan also wore silk armor.

The Marines' order will cost around $2 million, and come from the company Cooneen Watt & Stone, the company that supplies the British armed forces. And, having classified the order as having "unusual and compelling urgency," it seems they want them yesterday.

This article was provided by InnovationNewsDaily, a sister site of LiveScience.