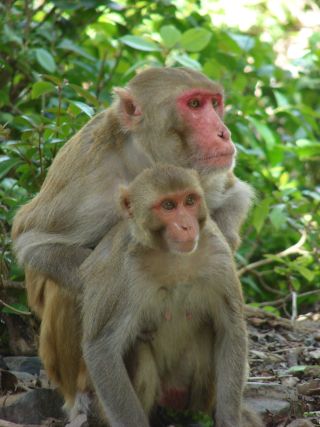 Rhesus monkeys don't need to be mind readers to spot a fertile female. They just need to be face readers.

When given photos of the face of a rhesus monkey before ovulating and one around the time of ovulation, males in the her group were pretty spot-on in their choice of which one to stare at.

"We found a strong effect. Around 85 percent of males familiar with the female preferred the ovulation face," said study researcher James Higham of the German Primate Center in Goettingen, Germany.

Having already interacted with the potential mate helps the male read her fertility, similarly to how humans are able to read subtle cues about their acquaintances to help navigate social situations. Males unfamiliar with the females showed no preference, seemingly unable to differentiate in which image the female was ovulating.

Other researchers had previously determined in the lab that male macaques have the ability to differentiate between other members of their groups. "They accumulate a lot of information on these individuals, including their dominance ranks and their kinship relations," Higham said.

When female macaques are ovulating, their faces darken. Still, they all have different complexions to begin with, so one female's darkest complexion can be lighter than another female's lightest. With this kind of overlap, how are the males supposed to tell when their preferred female is ovulating?

To find out, researchers showed males from two different groups images of female macaques either before ovulation, during the ovulatory period, or after ovulation. The researchers timed how long the males looked at each of the pictures, comparing pre-ovulation to ovulation. During a separate test they compared ovulation to post-ovulation.

The image that got the most eyeballing from the male was deemed by the researchers as the most attractive, and therefore indicative of the male's recognition of the fertility of the female.

The males from the same group as the female in the photograph seemed to remember the shade of her complexion from previous interactions, resulting in longer stares at the fertile face.

"Due to the male's experience with the females over time, they may learn if they usually have a dark face or a light face, and they see what kind of variation they display," Highman said. Males who can recognize a female's cycle may increase their chances of successfully reproducing with her.

Males from other groups, not acquainted with the females in question, didn't show a preference for either image, spending the same amount of time looking at both. These effects were seen only when comparing the pre-ovulation and ovulation pictures, not when comparing the ovulation and post-ovulation pictures. No matter how well the males knew the females, none of them could tell the difference between these two phases.

Human females show certain cues when ovulating too, though it's not clear how or to what extent most males are able to detect ovulation. "These similar sorts of effects may happen in humans," Higham said.

Humans do use similar familiarity strategies to understand other's actions, including times when they might be grumpy or frustrated, Higham noted, by using our recollection of their normal attitude to detect and interpret abnormal interactions.