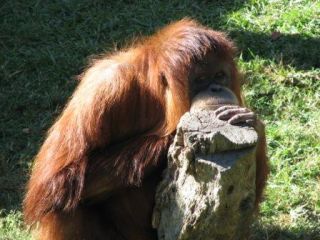 Mommy to be: Blaze should give birth to a new orangutan in November or December.
(Image: © Katie Gautreaux, Audubon Nature Institute.)

Zoo Atlanta's great apes have been getting busy lately. Blaze the orangutan is pregnant, just a few months after the zoo's gorilla, Kudzoo, got pregnant, zoo officials announced yesterday (March 30).

The new infant would be the first for Blaze, a 15-year-old Sumatran orangutan. The father is Benny, a 32-year-old longtime bachelor. Blaze came to Zoo Atlanta last year from the Audubon Nature Institute in New Orleans, La.

If everything goes smoothly, the new orangutan should be born in November or December.

In the gorilla exhibit, Kudzoo, the western lowland gorilla, appears to be progressing well in her final stages of pregnancy, according to a statement from zoo officials.

The 17-year-old is expected to deliver her second infant in late April or early May. Kudzoo and Taz , a 21-year-old male, have one previous offspring, Macy Baby, 5.

Kudzoo and her offspring are Zoo Atlanta royalty — she was the first-born offspring of world-famous gorilla Willie B. Her newborn will be the third grandchild of the iconic silverback, who passed away in 2000.

The Animal Management and Veterinary Teams have monitored Kudzoo closely throughout her pregnancy, due to a miscarriage last year. She is trained to cooperate with monthly pregnancy tests, which have continued to indicate positive results as recently as last week.

Zoo Atlanta is home to the nation's largest collection of western lowland gorillas, currently numbering 23, and the largest zoological collection of orangutans in the United States, with 13.